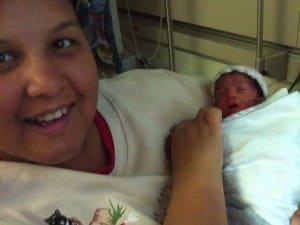 Christine Brown never expected to have her baby prematurely, much less inside a gas station bathroom. However, when the unexpected happened, she was lucky to be found by a deputy who knew what to do.

Deputy Robyn Burger was called to the gas station early Saturday morning. It had been reported that there was a woman in the bathroom, crying. What no one knew was that the woman was in labor, giving birth to her infant 10 weeks early. When she was found, the baby was already purple and not breathing.

Deputy Burger immediately called for help, and began working to revive the tiny infant. With the help of the Cass County Communications Officer John Bristow on the phone, Burger managed to get the baby breathing by the time the emergency crew arrived. The deputy has been credited for her quick thinking saving the life of the tiny girl.

Mother Christie Brown was reported as doing well, despite the traumatic ordeal. She has been released from the hospital and is eagerly waiting for her daughter to be big enough to come home as well. The little girl, Aleah Victoria Brown, will have to stay in the hospital at least 6 weeks while she continues to grow and develop. Thanks to the deputy, she is in stable condition and expected to stay healthy. – Summer, staff writer