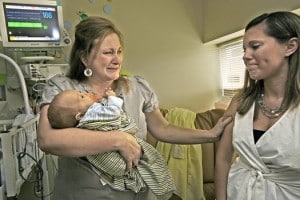 Two mothers, both had their babies at four months premature, both babies suffered from dangerous complications. As one mother struggled to produce enough breastmilk for her tiny son, the other faced gallons of pumped and frozen milk she would never get a chance to use.

Born premature, Jennifer Robinson’s son Max was diagnosed with a dangerous condition called necrotizing enterocolitis (NEC) shortly after his arrival.  Because this caused the blood supply to his lower bowel to be cut off, Jennifer was not sure that she would be able to take her son home. After his surgery doctors told her that breastmilk is thought to be protective against NEC and that it is the best-tolerated milk for infants recovering from the condition. However, despite having successfully breastfed her two older children, Jennifer soon found that her milk supply was drying up from the stress.

At the same hospital, Nicole Hendrix faced the opposite problem. Her premature daughter, Lillian, had died from her complications from the same condition and now, Nicole faced a freezer full of pumped breastmilk, and no daughter to give it to.

When Nicole Hendrix visited the hospital one last time to get the last of her things, she mentioned to a nurse how much of a supply she had built up. Word quickly spread that there was a mother in need of a breastmilk donation and even though the hospital had never done anything like this before, the two mothers were able to come together to share the miracle and heartache of their children’s births.

“This was a no-brainer,” Hendrix said. “I feel I would have regretted it if I didn’t. I feel I’ve given meaning to my daughter’s life, if this can help save Max.” 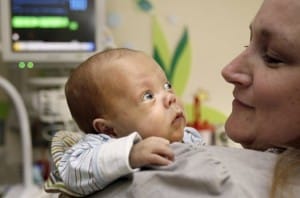 Four month old, Max now weighs 8 pounds, 13 ounces and is healthy enough to go home with his family. The mother who helped save his tiny life, Nicole Hendrix, joined Max’s family as they took him home at last. The two mothers now have a close bond shared through the simple act of breastmilk donation from one mother to another.

“With so much going on with their lives they would think of us,” Robinson said. “It was like they gave him an organ, something that could save his life.”

Breastmilk donations can save the lives of thousands of infants that are not able to be breastfed. Organizations such as the National Milk Bank and the Human Milk Bank Association of North America help to collect donated breastmilk and distributes it to women in need. -Summer, staff writer