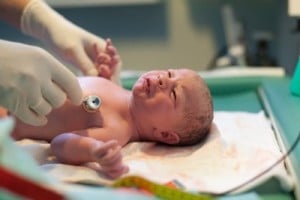 Researchers in Australia have found a new technique through which the number of babies who die during birth due to a complication known as Meconium aspiration syndrome can be radically reduced to half.

The syndrome is caused when the baby’s first bowel movement occurs just before birth leading to the baby inhaling its own waste. This syndrome is found to affect one in 2000 babies in Australia and is more common in developing nations. In China 10 percent of newborns in intensive care have this problem and every 4 in 10 babies die due to this syndrome.

Researchers in Menzies Research Institute Tasmania led by Associate Professor Peter Dargaville gave a trial of a new lung cleaning technique for newborns that could help those with this syndrome.

Said Dr. Dargaville, “”It involves putting a large amount of cleansing fluid into the lungs … the amount we use in a term baby is about 50 to 60ml. Many neonatologists, and people involved in neonatal intensive care, gasp when they see the video of the procedure because normally we are trying to keep the lungs dry. It is a radical departure from what we would normally consider to be appropriate care.”

The fluid filled into the lungs of the infants is a medicated liquid that is otherwise used for prenatal babies to fortify their lungs. The fluid is put through a syringe into the babies air way and then sucked out after a chest massage. When the fluid is removed, with it, the waste filled in the lungs also gets removed. The whole process takes just about a minute.

Dr. Dargaville calls it the ‘lavage’ treatment and says it differs from the conventional treatment where the baby was just monitored and supported in the intensive care unit while their body cleaned the waste itself.

The international trial of this technique was done in 20 neonatal units of Australia, New Zealand, Singapore, Malaysia, Taiwan and Japan. It was done on 66 babies who were critically ill. On comparison. the mortality rate of these babies was 10 percent as compared to the 23 percent mortality of babies given conventional treatments. Also while some of the babies need lung and heart bypass intervention with traditional treatments, none of the ‘lavage’ treated babies needed these.

The researcher feels that the trial run was on small number of babies but the results are big. It shows that “Babies ill with MAS can tolerate a lung-cleansing procedure, using a large volume of cleansing fluid. It is not something that can be undertaken lightly … it can’t really be done by people who haven’t been trained in the technique [But] for the most serious cases of MAS I do think this has something to offer.” said Dr. Dargaville