Like most triplets, Ffion, Maddison and Paige are unexpected little miracles in the lives of their U.K. parents. However, these three beautiful babies are also a rare occurrence because they are identical.

Triplets have become more common since the popularity of IVF, when multiple embryos are transferred. But in the case of these special ladies, a single embryo split into three separate ones.

The journey for Karen Gilbert, 32, and her husband Ian started with conception, which happened during the couple’s honeymoon in New York. Obviously, they were overjoyed to learn they were about to become parents again, but they would soon learn that they were getting a bit more than they’d bargained for. 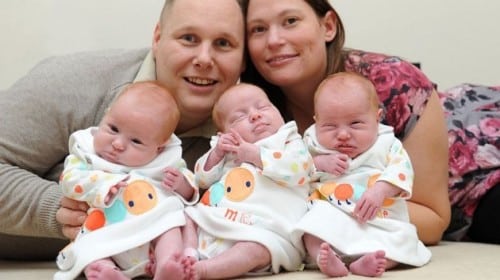 “At first we thought it was one, but at eight weeks I got some really bad pains,” Karen told ABC News. “We thought it was a miscarriage, but it turns out it was three babies fighting for space.”

Over the next several months, Karen would experience a lot of pain, not just because she was pregnant, but because she had three little fighters growing inside of her.

“It has really taken its toll on Karen,” Ian told ABC News. “Because they are identical, they all share the same placenta and the same fluid. They all grew and fought so quickly it was practically ripping Karen’s muscles apart.”

That very same sharing also put the triplets at a higher risk for twin-to-twin transfusion syndrome – a condition in which blood from one fetus transfers to another. Yet, despite the risks and the pain, Karen and Ian decided against selective reduction – a process that aborts one or more fetuses in a multiple pregnancy. Because of that, doctors took every possible precaution to ensure the babies were growing healthy.

“We were scanned every week to make sure they were growing fine,” Ian said.

Then, at one of the scans, Karen started feeling pain. As it turned out, she was in early labor – two months early, to be exact. They were at risk for a number of complications, but thankfully, despite being rather small (a combined weight of just 11 pounds), the girls seemed to be just fine.

“At first they didn’t look real and you could pick them up with one hand. It was a little bit of a shock,” Ian said.

But the girls are growing quickly, and they were recently released to go home with their parents and their older sister, all of which are excited to welcome them home, despite the huge shock of suddenly going from a family of three to a family of six.

“Now we’ve got them home we are coming to terms with it,” Ian said. “They are starting to feel like our own.”

“It’s been crazy. Their personalities are already starting to shine through and I can’t wait to get to know them better,” Karen said. “The pregnancy has taken its toll, but now I’m taking my time to recover and get to know my three beautiful girls.”

Congratulations to the family on the safe delivery of their three beautiful bundles of joy!