In developed countries, we often take the little things for granted. But in developing countries, the simplest things can make the difference between life and death. Take Nigeria, for example. It is considered to be one of the 10 most dangerous countries to give birth. Approximately 40,000 Nigerian women died during child birth in 2010 alone; according to the World Health Organizations and United Nations, that accounts for 14% of all childbirth deaths in the world. The infant mortality rate is the highest in all the world – about 4% of all babies in Nigeria die before reaching 28 days old. Compare this to just 0.4% in the United States.

Dr. Laura Stachel experienced the tragic and disturbing conditions in which Nigerian women give birth, firsthand, while on a research trip in Nigeria. What she found while there was nothing short of alarming.

“There’s a traditional African saying, ‘When you become pregnant, you have one foot in the grave,’’ Laura told CNN. “There are so many women dying in childbirth in many communities. Pregnancy is feared.”

While visiting one of the clinics in Nigeria, a doctor was performing an emergency cesarean section. Suddenly, the lights went out. While that is concerning, Laura found it even more concerning that everyone seemed to be nonchalant about the sudden loss of lighting.

“When I went to Africa, I saw these women, one after another, coming in with complications, and we didn’t even have adequate light to treat them,” she said. “You didn’t even see people reacting because it was something they were so used to.”

Thankfully, she had a flashlight with her. The doctors were able to use that light to complete the surgery, but during the short two-week stay there, she witnessed countless other instances where the lives of women and their babies were compromised by lack of adequate lighting. Women with severe complications would show up at the clinics, but procedures would be postponed until daylight. Midwives used makeshift lighting, like cell phones, kerosene lamps and candles to deliver babies. There were even some instances in which women needing immediate help were turned away.

“That’s not adequate light for maternity care. If somebody is hemorrhaging, if a baby needs resuscitation, you need to have direct light,” Laura said. “I realized that my skills as an obstetrician-gynecologist were utterly useless (without) something as basic as light and electricity.”

The conditions were so grim, Laura said, that she realized she had seen more complications in her two week stay in Nigeria than she had during her entire career as an OBGYN in the United States. She knew that something had to be done. But more importantly, she knew that she could do something about it.

“Once I witnessed the things that I saw,” she said. “I had to let people know, and I had to do something about it.”

She and her husband, Hal Aronson, a solar energy educator, went to work as soon as she got home. Hal drew up some designs for a solar electric system that could provide free power to the northern Nigeria state hospital that Laura had conducted her research at. Hal started with a small kit that would serve as a model for the larger system. While he and Laura worked on raising funds for the bigger system, Laura returned to Nigeria to show off the model so they could familiarize themselves with how the system would work. Though the kit was only meant to be a model, the surgical technicians at the hospital saw so much more. 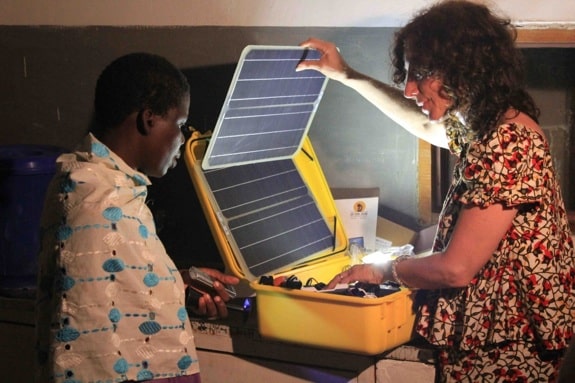 Image via We Care Solar

“They said, ‘This is incredible. You have to leave this with us…This could help us save lives right now.’” Laura said.

And so she did. The news spread quickly to other clinics. Before Laura and Hal knew it, they had set up a nonprofit organization, We Solar Care, and they were making one or two kits for each of Laura’s trips back to Africa. And over time, they worked at making the suitcases simpler but still functional in design. Today, it includes two solar panels that are mounted on the clinic’s roof, LED lights that are connected to the solar panels, headlamps, a fetal Doppler, and a cell phone charging unit. Once fully charged, the kit can provide light for up to 20 hours. 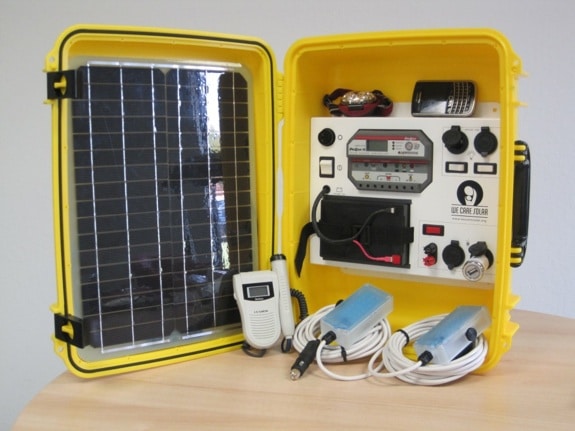 Image via We Care Solar

“We got to something that was rugged, simple to use, portable, and that we knew would really work in harsh environments,” Laura said.

Now the kit has spread to other developing countries throughout Africa, Asia and Central America. To date, they have provided nearly 250 solar suitcases to facilities in more than 20 countries. They’re being used in main hospitals as backup systems, and in rural clinics as a primary source of electricity. But these kits have done more than just provide electricity; they’ve provided hope and a boost in health care morale.

“It’s just shifted the morale of the health-care worker,” Laura said. “They’re now excited to come to work…Mothers are now eager to come to the clinics.”

Fanny Chathyoka, a midwife in a rural clinic in Malawi, received her solar suitcase last month. Before she’d received it, she’d used the light from her cell phone to deliver babies and treat patients at night. She says that the kit has done so much for her and her patients.

“[It] keeps me going,” she said. “This light…is going to bring good changes. We should not lose any women. I will be able to give good deliveries. Suturing will not be a problem for me. Resuscitation of a baby at night will not be a problem, because of the light. I feel very happy.”

For Laura, it is just one piece of a bigger mission to improve the maternal and neonatal healthcare in developing countries such as these. They hope to continue expanding on their bigger project – the large, full-sized solar power system, which was completed and installed in the Nigerian state hospital back in 2009. That system resulted in a decreased death rate of 70% among women. No longer does the hospital have to turn women away, and they can store blood for blood transfusions because they now have enough power to keep a blood bank refrigerator running.

“When we saw the impact, that gave me the impetus to provide this fundamental thing for people to do the job they know how to do,” Laura said.

But as they work at raising more funds for more hospitals, Laura and her husband Hal work on providing as many clinics and hospitals with solar suitcases as possible. Each one costs about $1,500, and they are given to the clinics for free; funding comes from grants and support from partner organizations and sponsors.

Laura says that, while she didn’t set out to change the world, she did set out to make a dent in a very big problem. And the result of her efforts has been nothing short of amazing. She hopes that her efforts will create an entire movement that will improve the childbirth experience for women all over the world.

“We didn’t set out to transform maternal health care around the world, but if tells like this has grown to something so much bigger than I had ever imagined,” Laura said. “Communities are celebrating the fact that they have light. And that they now have more than one component to help with safe motherhood. It’s amazing.”

To stay up to date on Laura’s adventures, please visit her blog.