For a good 20 years, the American Academy of Pediatrics has advised that parents avoid feeding solid food before babies reach the age of 4 months. That suggestion was revised last year, and parents are now being encouraged to provide nothing except breast milk until the baby reaches six months. When breast milk isn’t an option, formula is considered an acceptable alternative. Unfortunately, the message doesn’t seem to be getting across, the CDC says. 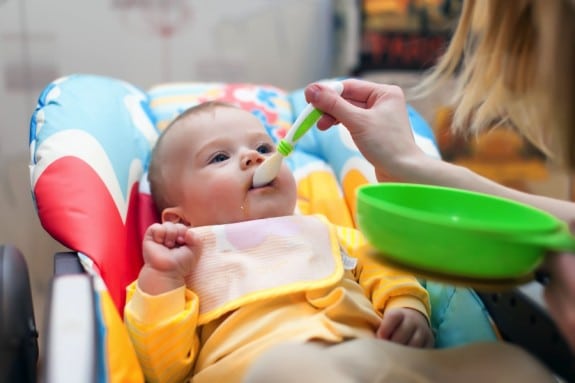 In a national survey of 1,334 mothers, 40 percent said they gave their baby solid foods before the age of 4 months, and 9 percent said they had started as early as 4 weeks. This suggests that either mothers aren’t aware of the recommendations, or they find them too difficult to follow.

Some of the most popular reasons for offering solids included “my baby is old enough,” “my baby seems hungry,” “I wanted my baby to sleep longer at night,” and (the most concerning of all) “a doctor or health care professional said my baby should be eating solid food.”

Economics seemed to play a part in the decision. Young, unmarried, and less educated women seemed turned to solid food more often than other mothers. Poorer women, who tended to view formula as more expensive, also tended to feed solids sooner than those in higher income brackets. Additionally, those that exclusively fed formula or a mix of formula and breast milk were the most likely to say they’d received the go-ahead from their child’s pediatrician.

“Clearly we need better dissemination of the recommendations on solid food introduction,” Kelly Scanlon, an epidemiologist with the CDC, and an author of the study, told NY Times. “Health care providers need to provide clear and accurate guidance, and then provide support to help parents carry out those recommended practices.”

The problem is, that while pediatricians may be sympathetic to the difficulty that parents face in feeding their child only breast milk or formula during that first six months, it’s important that they stand by what they already know . . . little good can come of feeding a baby solids before they are truly ready.

“When a baby is ready to start eating food, he will put his hands in his mouth, and you will see him actually making chewing motions,” Dr. TJ Gold, a pediatrician with Tribeca Pediatrics in Brooklyn, told NY Times. “At three months, they can’t even hold their heads up well and they can’t sit up, making it difficult, if not dangerous to put solid food in their mouth.”

In addition, infants under six months haven’t had the chance to fully develop the diversity of gut bacteria needed to safely process solid food. This can lead to a number of gastrointestinal problems, including diarrhea and gastroenteritis (inflammation of the intestines). And there are studies that have linked the early introduction of solids to problems ranging from obesity and diabetes to eczema and celiac disease.

And those reasons for feeding solids early? They don’t really hold up much when you really take a good look at them. For example, if a parent is turning to a bottle to help a baby sleep at night or gain weight, they might find that, in some ways, they’re actually being counterproductive.

“That big fat bottle at the end of the night isn’t why your baby is sleeping—it’s a skill you acquire,” Dr Gold said. “And if you think giving your child more calories is going to help him gain weight, but it gives him more diarrhea, then he’s not actually absorbing as much.”

In fact, the only one that really holds any serious weight is the cost of formula.

“The formula gets really expensive, especially in the 4-to-6 month window,” Gold said. “and if you have more than one child and you’re already preparing food for the whole family, it’s much easier to just start sweeping things off your plate.”

This issue can be balanced out by encouraging breastfeeding as much and as long as possible, especially for women that are in lower income brackets. This is because, unlike formula, breast milk is supply and demand. As your baby needs more, your body produces more. For help with breastfeeding struggles, seek out help from a lactation consultant or a pediatrician that supports long-term breastfeeding.