Home » Songs Played during Pregnancy Remembered by Babies after Birth 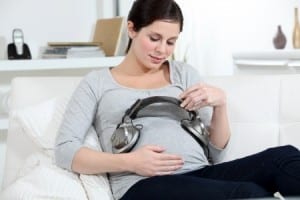 Can babies learn while in the womb? Some experts say yes; some have even encouraged expectant mothers to play classical music during pregnancy to help make their babies smarter. Now, we don’t know for sure if all those claims are quite true, but a new study does suggest that babies can form memories while in utero.

“They recognize the memory, and their brains react to it,” co-author on the study, Eino Partanen, a University of Helsinki psychologist, told Health & Science. “But do we mean memory like we have in adults? No. This is more like familiarity.”

It’s not that far-fetched to believe that an infant can remember a sound heard frequently while in utero. Throughout the 20th week of pregnancy, key structural parts of the ears start to develop. Several weeks later, neurosensory connections going from the ear to the brain start to develop.

“By the start of the third trimester, all fetuses should be able to hear,” Partanen said. “The questions was, could we get the fetuses to learn something new.”

Partenen and his colleagues were fascinated by some of the anecdotal and behavioral studies conducted on newborns – studies that suggested a fetus could learn. One such study, titled “Fetal ‘Soap’ Addiction,” looked at mothers who had regularly watched a specific soap opera. After birth, their babies seemed to recognize the theme song of their mother’s favorite soap, and many even stopped crying to focus their attention on the television when the tune played.

But Partenen wanted more than just speculation; he and his colleagues wanted evidence to back up the vague speculations. So they set out to test the theory by recruiting ten expectant mothers, all of which were instructed to play “Twinkle, Twinkle Little Star” loudly multiple times per week throughout their last trimester of pregnancy.

A few days after the babies were born, researchers took an electroencephalogram (EEG) recording of each newborn’s brain by scattering 12 different electrodes over different regions of the brain. When newborns heard the lullaby, they displayed significantly larger brain responses than a control group that had not been exposed to the song while in utero.

“It is a matter of noticing a difference of what you hear and what you should be hearing,” Partanen said. “Memory plays a part in that.”

EEGs also revealed that the strength of electrical signals from a baby’s brain were relative to how frequently the mother played the song throughout her last trimester. What’s more, the babies even seemed to notice when “wrong” notes were played – in other words, if the song was altered, the brain reacted differently. Four months later, the study was repeated; the results were the same.

Study co-author and University of Helsinki psychologist, Minna Huotilainen, referred to the phenomenon as “preconscious learning.” Though their brains are somehow aware of the fact that they’ve heard the song before, the babies themselves aren’t exactly aware of it.

Partanen suggested that expectant mothers sing a specific lullaby during pregnancy. Once the baby is born, the song can be used to soothe baby and remind them of their time in the womb.

“The voice of the mother is the most salient sound in the womb,” he said, adding that the use of a mother’s voice could have heightened the results of the study since a mother’s voice can drown out all external sounds.

Janet DiPietro, a developmental psychologist at Johns Hopkins who has been doing fetal research for 20 years, agrees that it is possible for fetuses to learn. However, she warns mothers not to go overboard with the idea.

“It’s plausible since late-term fetuses display the full repertoire of abilities that newborns have. They can both learn,” she told Health & Science. “[But] just because fetuses can learn doesn’t mean you need to teach them things. The intrauterine environment has plenty of stimulation.”

She says a lot of expectant moms ask her if they should play classical music for their babies to make them smarter.

“I ask them, ‘Do you like classical music?’ ‘No, not really.’ So don’t listen to it!” DiPietro said. “The best thing for the fetus is to keep yourself healthy.”