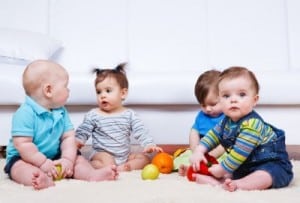 For two years, Isabella has held the top spot for baby girl names, but it now it sits in the number two spot after being replaced by Sophia. For boys, Jacob still holds the number one spot, a trend that has been going strong for thirteen years now.

In addition to Sophia and Isabella, Emma, Olivia and Ava were said to be the top five girl names. For boys, the top five included Jacob, Mason, William, Jayden and Noah. Michael fell to number six on the list, dropping it from the top five for the first time in 63 years.

The Social Security Administration provides a list of baby names and their popularity that dates all the way back to 1980. In that year, the top names were Mary and John. The administration bases the ranks of various names by drawing from millions of people across the country and each name is even subdivided by spelling.

Girl names tend to be the fastest change trenders – the top names can change drastically from one year to the next. Boy names tend to be more stable, but there are fluctuations there as well. Creator of the website, babynamewizard.com, Laura Wattenberg, says that Americans pull inspiration for names from a wide variety of source – religion, relatives and popular culture. One of the biggest influencers to name changes is pop culture. She compared baby naming trends to fossils, saying that the history of baby name trends is like “a fossil record of our culture.”

“It shows what we’re paying attention to, what we’re thinking about. Today, you can’t walk through a supermarket without learning more than you hoped to know about the Kardashian family. That’s just reality,” said Wattenberg. But she says that following celebrity baby name trends isn’t necessarily about paying homage to celebrities; it’s more about parents hearing a name that they might not have heard otherwise.

“Celebrity naming is just about the exposure, and about everybody hearing that name at the same time,” Wattenberg stated. “It’s not about the fame, it’s about the name.”

Religion has also been a long-standing influence on baby naming, but the trends are changing, even for this baby naming inspiration source.

“The traditional biblical names were New Testament names – John, James, Mary and Elizabeth,” said Wattenberg. “Today, the hot names are all names from the Old Testament precisely because they were neglected for so many generations.”

Parents can access the website and see all of the baby names and ranks for free. Social Security Commissioner Michael J. Astrue says he hopes that parents also visit the site to see what other services are offered by the Social Security Administration.