Baby Abigail ran out of patience Thursday when she made her debut en route to Manhattan. 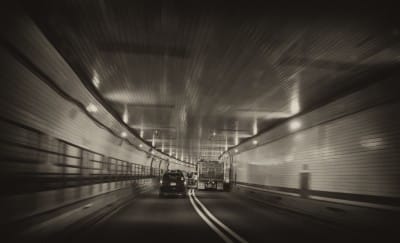 It was a typical day in New York City.  The morning commute was in full swing.  A 29-year-old woman, from Queens, (who has not been named) was sitting in a taxi, traveling from her mother’s house in New Jersey into Manhattan.  She was headed to a hospital appointment in anticipation of her Friday due date.  But, the baby had other ideas.

Caught in a steady stream of traffic, approaching the Lincoln Tunnel, the woman went into labour.  Realizing he was out of his depth, the cab driver pulled the car over at a Port Authority police post within the toll booths.

Officer Kevin Leonard called over to headquarters, where he reached Officer Richard Kuncken.  Officer Kuncken is a man of many talents.  He is a licensed paramedic and is actually the officer charged with teaching recruits how to handle an emergency birth situation.  He was the ideal man for the job.

The headquarters is right across the street from the Port Authority post where Officer Leonard and the laboring woman were located.  But, at 8:30 a.m. the commuter traffic presented an obstacle that made response by road an unattractive option.

Instead, in true Gotham City superhero style, Officer Kuncken rushed through a passageway under the street and was able to respond in a minute.

Even with such a speedy response, the birth was well underway by the time Officer Kuncken arrived. “The baby was on its way out, and we just really completed the process,” he said.  “Fortunately for us, it was an uncomplicated delivery.”

The officers attended to the baby, (drying her, warming her, and cutting the umbilical cord) until the ambulance arrived to take the newborn and her mother to Hoboken University Hospital.  Mother and child are doing well.

Officer Kuncken is an eight-year veteran of the Port Authority and recalls that there was another birth near the Lincoln Tunnel about six years ago.

Officers have to be ready for anything and when training newbies on emergency births, Officer Kuncken says, “I tell our recruits at the police academy, ‘It’s not likely, but it’s not unprecedented, either.’”