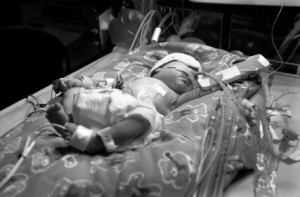 Monitoring of an infant’s growth is an important part of early development. But a new study says that parents shouldn’t be overly concerned if their child isn’t measuring up to other children their age. Published in the journal Pediatrics, the study suggests that, while children who are behind in growth during early development may remain shorter and lighter than their peers for a long time, they will eventually catch up.

“Overall, parents can be reassured that well babies showing weight gain in the first year do eventually recover to within the normal range, but at 13-years tend to be lighter and smaller than many of their peers,” Professor Alan Edmond, Professor of Community Child Health in the University of Bristol’s School of Social and Community Medicine told Medical New Today.

Researchers then followed up on these individuals over the next several years. According to researchers, children in the ‘early group’ tended to recover quickly from their lack of weight gain; many of them reached a normal weight by age two. By the time they reached the age of 13, children from the ‘early group’ were found, on average, to be only 3.25cm shorter and 2.5kg lighter than those that had grown normally during infancy. Researchers hypothesized that children from the ‘early group’ may have simply been suffering from feeding difficulties that were identified and resolved, which enabled them to make gains effectively and early.

While those that were in the ‘late group’ took longer to catch up to their peers, they continued to gain weight gradually until the age of seven. At age 7, researchers noted that these children experienced a growth spurt. By the age of 13, they were only an average of 4.4cm shorter and 5.5kg lighter than children who had normal growth during infancy. Essentially, they had ‘caught up’ with their peers.

“As Children of the 90s is an observational study, there is limited information available about which infants received nutritional supplements or medical treatments,” Edmond said. “Those children who showed slow weight gain later in infancy took longer to recover, because of the longer period of slow growth and because their parents were smaller and lighter too.”

The information from this study is important because, often, physicians are unsure of how to address slow weight gain in children. Concerns may prompt them to increase calorie intake of smaller children, but increasing calorie intake too quickly or too much can severely increase a child’s risk of obesity later on in life. For this reason, the study authors suggest that physicians not make changes to a slow-growing child’s diet, unless there are reasons to be concerned about the child’s overall health.