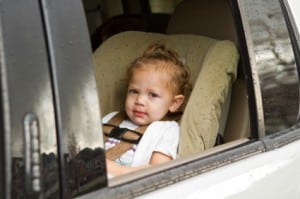 The other day while I was driving I looked back and noticed my son had reached across the back of my SUV and was grabbing something from his brother.  How did he do that I thought and then I realized he had unbuckled himself so that he could retrieve a toy his brother was playing with.

Car seat safety is something I am very passionate about and I pride myself on knowing that we have 2 very well designed seats in our vehicle that will protect them if an accident occurs.  But what good is that if the little monkey can worm his way out of the straps or even worse – unbuckle the seat completely…

Researchers at Yale University’s School of Medicine recently found that my son is not the only one who has figured out how to get himself out of his seat.  In fact the majority of kids less than three years old can do it, with boys leading the pack.

“Young children might acquire the motor skills to unbuckle from restraints before developing the cognitive ability to understand the necessity of automotive restraints,” said Dr. Lilia Reyes, a clinical fellow at Yale and co-author of the report.

The researchers hope the findings, which are based on 500 surveys distributed at pediatric offices in Connecticut, prompt a broader study on devices that would keep kids safer, particularly because car crashes are a leading cause of death among four to eight years old.

The survey results revealed that more than 40 percent of children who are able to unbuckle the restraints are doing so while the car is moving, prompting many parents to pull over, reprimand and then re-buckle the child.

Dr. Reyes said the idea for the study came after researchers treated patients from accidents caused by the unbuckling and parents, distracted by their children, looking away from the road.

In the future, she would like to see a study include a simulation lab to test safety features on a variety of restraints.

She also noted that some solutions to the problem could include better-engineered seatbelts or even an alarm.