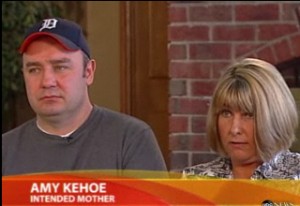 Scott and Amy Kehoe tried everything they could think of for eight years to become parents, finally turning to a surrogate to help them. One month after birth, however, the surrogate came back for the babies she delivered for them and kept them.

Michigan, where the Kehoes live, is one of only five states that does not recognize surrogacy contracts. Because the adoption was not yet completed, the surrogate mother was within her legal rights to take back the twins at any time. To the Kehoes it is nothing more than “legal kidnapping”.

Shelley Baker, the surrogate mother, went before a judge one week after having the twins to begin the adoption process. She told the judge that the Kehoes “love these babies very much.” However she said she also began feeling uncomfortable after learning more about Amy Kehoe having a criminal record and seeing a psychiatrist. 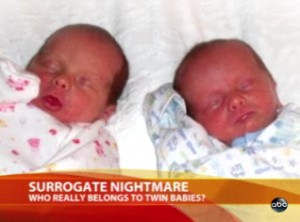 Amy Kehoe’s psychiatrist gave her a letter of recommendation, saying she was consistent with her medication and her therapy. He felt that her mental health issues would not get in the way of her being able to parent well. Shelly and her husband felt otherwise. Despite the infants bonding with the Kehoes, the Bakers removed the twins and choose to parent them. They have also legally changed the infants names to Peyton and Dani.

Amy Kehoe was arrested for minor cocaine possession 9 years ago and has had no criminal issues since then. She was also diagnosed with an unspecified psychotic disorder for which she takes medication and sees a psychiatrist regularly. Amy claims that she was honest with Baker about her mental health issues, however Shelly says that she first heard of the issues during the custody hearing. – Summer, Staff Writer