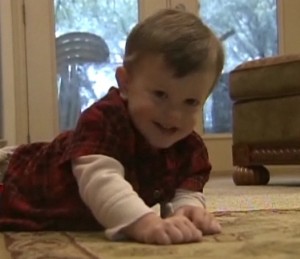 Cannon Jamison is one lucky little boy! The toddler fell out of a second-story window two weeks ago, but was miraculously caught by a neighborhood friend who was spending the weekend.

The curious little guy was peering out an upstairs window watching his brother play outside when eighth-grader Cary Clevenger noticed him and told him to get back from the window sill. 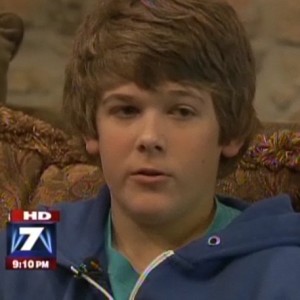 However, like most two-year-olds, Cannon had a mind of his own.

“He was trying to be cute and funny and hitting the screen with his hands and putting his face against it,” Cary said. “Then he hit it even harder, and he fell.”

On the way down Cannon tumbled from the window and bounced off a wall lamp before falling into Cary’s waiting arms.

“He fell out, and I stepped up and towards it, the window, and I just held out my hands and caught him,” Cary said. Amazingly, they both hit the ground, unharmed. 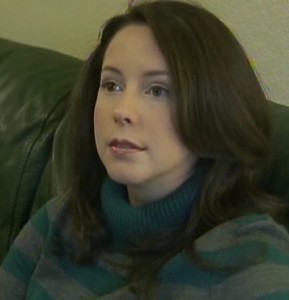 Christie Jamison, Cannons mother, was in the kitchen when the teen brought the toddler in.

“He was crying, so I knew he was alive, I really didn’t think… I thought the worst,” “I just took Cannon, ripped all of his clothes off to make sure there was nothing bleeding or broken, and he was fine.”

Just to be sure, Christie took the toddler to the emergency room. She said although he was fine, she has trouble forgiving herself.

“It makes you feel like a horrible parent, but it was a relief,” she said.

Since the incident the Jamison’s have made a couple major changes. The window now has a lock on it and it can only be opened ‘five or so inches’.

“We actually hope that this story will raise awareness for other families with two-story homes to secure the windows, especially if they have little kids. You never know,” words from a thankful mom.

Meanwhile, Cary has been recognized as a hero by his principal at Dahlstrom Middle School and by his church.