Home » The Schreibers Vacation in Australia

Naomi Watts and Liev Schreiber posed for a family photograph outside a friend’s house before heading to a barbecue to celebrate Australia Day. 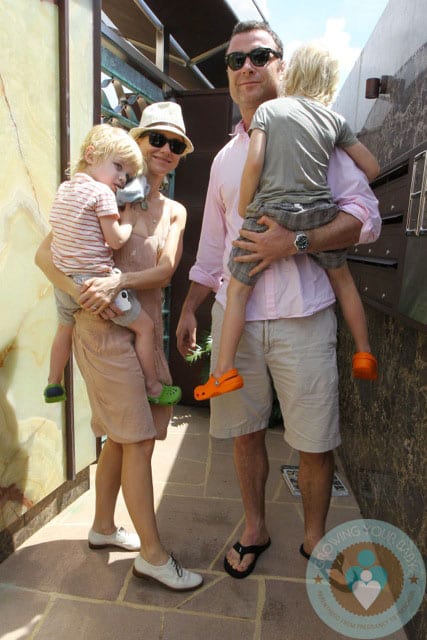 The family normally trades the cold NYC weather for sunny Australia around this time each year.  Naomi was born in England but moved to Australia when she 14.

While she loves her birth country, she also has expressed her nationalism for Australia saying,

“I consider myself very Australian and very connected to Australia, in fact when people say where is home, I say Australia, because those are my most powerful memories.”

It is also important for Liev and Naomi to show their boys the world.  During an interview with the Mirror.uk earlier this year she revealed that the experiences they get while traveling are more important because they are so young,

“Luckily our children are still young and at the age where it doesn’t matter if they miss a bit of pre-school or nursery.”

“They learn on the road with us. For example, last year, when we shot a movie called The Impossible in Thailand, they got to ride on elephants. they also had frogs and snakes in their shoes!

“They’ll never forget all these adventures. But when it comes to them being in proper school, we’ll have to stay more in one place.”