Rachael Udell, 31, and her husband Ashely Udell, 29, had been married for two years when they decided that they were ready to start a family. Before long, they found out they were pregnant. Soon after that, they discovered that they had naturally conceived triplets. They were overjoyed by the news. But it wasn’t long before their joy turned to fear.

At 24 weeks pregnant, Rachel started experiencing pelvic pain so Ashley took her to the Royal United Hospital in Bath, Somerset. Later that day, doctors sent her home. But the pain wouldn’t go away so early the next day, the couple headed back to the hospital.

When Rachel arrived at the hospital a second time, doctors looked at her situation a little more seriously. They were certain that the triplets were on their way. They gave Rachel some drugs to try and delay her labor and sent her over to St. Michael’s Hospital in Bristol for an emergency caesarean. 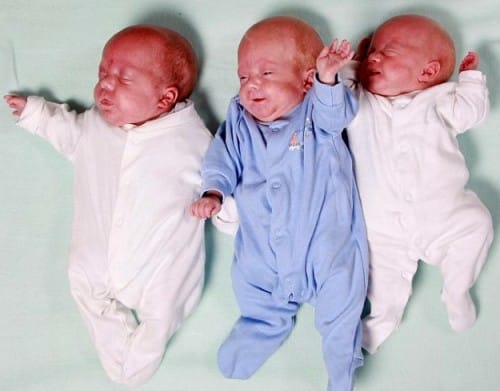 The odds were stacked against the Udell family. Survival rate expectancy for triplets born at 24 weeks is about 26%.

“We were having scans every two weeks and everything was fine. They were growing exactly how they should – until I had pelvic pain,” Rachel said. “I was rushed to the hospital in Bristol and my waters broke. I just went into panic and I was really scared. I didn’t think they would survive – I knew the chances of premature triplets dying was high anyway – it was awful.”

“I was in the maternity ward for three days then we went straight by their bedside,” Rachel said. “They were so small and I knew they were in a lot of danger. It was dreadful. Instead of being excited about my babies, I was terrified that they would not survive.”

“We could not have much contact because they were in boxes. We could not touch them much because they needed rest and had the risk of infection,” Rachel said. “We were only able to bring them out now and again for skin-to-skin contact. It was so hard with the tubes down their throats and so many wires coming out of them.”

But the Udell boys proved to be stronger than the odds. After 12 blood transfusions between them and a life-saving operation for Max, they became a little stronger each day. And as they got stronger, they were transferred, one by one, back to Royal United Hospital in Bath.

Harvey would be the first to go. Lucas followed five days later. But it wouldn’t be until after Christmas that Max would join his brothers. Their parents traveled between the two hospitals so that they could be with all of the boys over the holiday.

Now, the boys are home with their parents. They still require around-the-clock attention and a lot of care, but Rachel and Ashley couldn’t be happier.

Their eyes are still developing and they are having checks all the time. People look at them and say they look so tiny, but to us they look massive. They have gone through so much,” Rachel said. “It is fantastic to have them home – we finally feel like a proper family. Things like complaining because they are crying feels so trivial now. It’s just great that they have survived.”