In 2010 when baby Hannah was born, she could not breathe, drink, eat or swallow on her own. It was because the baby girl was born without a wind pipe. Now, more than 2 years later, the little girl is the youngest patient in the world to have a new windpipe grown from her own stem cell. 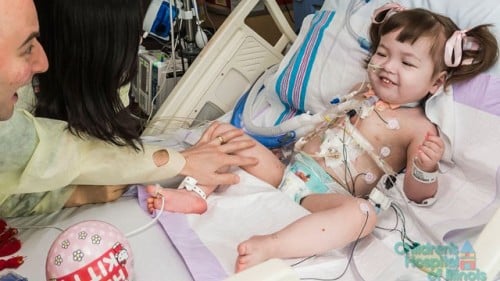 Hannah Warren was born in South Korea. Doctors had told her parents there were little chances of her survival and she spent the last two years struggling between life and death in a hospital in Seoul. Finally, an experimental operation in a central Illinois hospital gave her a new windpipe and a new lease of life.

“We feel like she’s reborn,” said Hannah’s father, Darryl Warren. “They hope that she can do everything that a normal child can do but it’s going to take time. This is a brand new road that all of us are on,” he said. “This is her only chance but she’s got a fantastic one and an unbelievable one.”

In Korea when the missing windpipe was discovered, doctors reconfigured her esophagus so that a breathing tube could go down it from her mouth to her lungs .They did not hope though that the baby would survive for long with such a condition. But Hannah outlived the prognosis. She did struggle with other abnormalities including an undeveloped voice box that prevented her from speaking.

But her life has changed after the innovative surgery.

Hannah’s windpipe has been regenerated from her stem cells that came from her bone marrow. They were extracted with a special needle that was inserted into her hip bone. The cells were then seeded in a lab onto a plastic scaffold, where it took less than a week for them to multiply and create a new windpipe.

The surgery to place this windpipe inside her body was done on April 9th when it took the doctors about nine hours to fit the three inch tube. 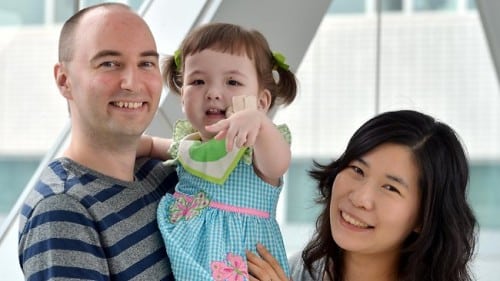 Her doctors announced on Tuesday that though the toddler is on ventilator support, her windpipe seems to be functioning. She did develop an infection after the operation, but is now healthy and will hopefully be able to lead a normal life like any other two year old.

Hannah will turn 3 this August and her father is very hopeful that she can be brought home for the first time in about a month.

“It’s going to be amazing for us to finally be together as a family of four,” he said.

He and wife Lee Young-mi have an older daughter. They met in Korea when Darryl moved to the country to teach English.

The doctors said that only about one in 50,000 children worldwide are born with the defect Hannah had. They also said that stem cell surgery was not just helping regenerate windpipes it could be used to make other body parts too and created hope for children born with birth defects.

Hannah’s surgery was conducted by an Italian surgeon based in Sweden who pioneered the technique Dr. Paolo Macchiarini. Her parents had read about his new procedure but couldn’t afford to pay for the operation at his center, the Karolinska Institute in Stockholm. So Dr. Mark Holterman helped the family arrange to have the procedure at his Peoria hospital. Children’s Hospital waived the cost, likely hundreds of thousands of dollars, Holterman said as they asked the Italian surgeon to come and perform the surgery here.

Dr. Macchiarini has previously performed the procedure 14 times using the patients’ own stem cells – five using man-made scaffolds like Hannah’s but in adults; and nine using scaffolds made from cadaver windpipes, including one in a 10-year-old British boy.

Similar methods have been used to grow bladders, urethras and last year a girl in Sweden got a lab-made vein using her own stem cells and a cadaver vein.

Dr. Anthony Atala, director of Wake Forest University’s Institute for Regenerative Medicine said he hopes the same method can be use in the future to create bigger organs like kidneys and livers.

As Hannah recovers she will be given speech therapy to be able to speak. She might need a new windpipe in another five years as she grows older. She has still not begun eating food but has had her first taste of a lollipop.

When her father gave her a chocolate Korean lollipop she enjoyed the taste.