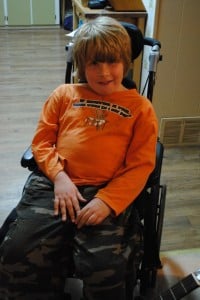 Tanner is a typical 10-year-old boy. He loves to be silly, make others laugh, and he’s dying. Tanner has Duchenne’s Muscular Dystrophy, a disease that is quickly ending his life. Thanks to a loving aunt, Catherine of HerBadMother.com, his short life has become an emblem for helping those that you care about.

Duchenne’s Muscular Dystrophy is a disease that rapidly deteriorates the muscles, making a person weak and unable to hold his own body weight. For most children, life expectancy is only to the teens or early twenties. Children, like Tanner, often need around the clock care as they are no longer able to move their own bodies because of the loss of muscle. This deterioration, is what pushed Catherine to work to raise money for Tanner and his mother.

As Tanner’s situation becomes worse, it becomes obvious that he will need more care than he could get at home. Feeling that the thought of him spending his last moments in a hospital rather than at home, Catherine began a campaign to have her sister’s home remodeled so that Tanner could stay home and still receive the care that he needs. 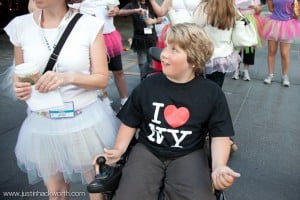 What began as a desire to run a marathon for Tanner, as Tanner’s mother does, grew into Tutus For Tanner. Raising awareness about Duchenne’s Muscular Dystrophy, as well as raising money to help build up Tanner’s home, the cause grew and spread as more and more people heard about it and wanted to help. The most recent help came as women lined up to run and walk in a 5K while wearing tutus in New York City during the BlogHer conference. Tutus for Tanner became widely visible as people who had never met Tanner, his mother, or Catherine, donated to make sure he could be at home during his final days.

Now, well over their goal, Catherine has not stopped yet. She is still working to raise awareness of Muscular Dystrophy and raise funds to help other families in the same situation. She urges donations to MD Canada, Parent Project Muscular Dystrophy, or Make A Wish Foundation so that other families can receive help, support, and a chance to enjoy precious memories together. – Summer, Staff Writer