Over the past 6 years there have been a number recalls and warnings about magnetic balls.  If ingested they can join two portions of a child’s stomach together that is not meant to be linked, which can cause serious health issues for kids.

Those warnings, however, may not have reached families in Europe because over the last week two children in Israel needed emergency treatment after they swallowed various types of magnets. 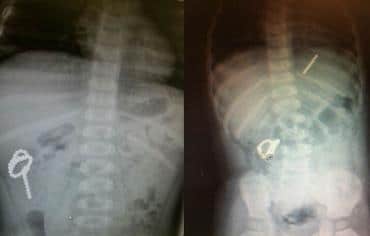 The JPOST reports that two kids aged 22 months and 12 years, needed to be treated at Haifa’s Rambam Medical Center after the metal balls ruptured the toddler’s intestines.

Last week the toddler’s parents brought him to Rambam after they noticed that he had swallowed the magnets by mistake. X-rays showed they were located in two different sections of the intestine but came together because of the magnetic attraction. This movement caused them to put pressure on the intestine, which brought on gangrene and holes in the tissue.

But in this case, there was no way they would get out by themselves, which meant an operation was needed to remove them and fix the holes in the intestine.

A surgical team headed by Dr. Ran Steinberg performed the surgery and the toddler is now under supervision in pediatric intensive care.

“If [the magnets] remained there, [they] could have caused an infection that would have spread throughout the stomach and intestinal lining,” he said.

Because they were in one bunch, doctors are hoping they will be eliminated naturally.

The doctors are still waiting for a bowel movement to make sure they are out.

“We encounter so many cases of swallowing of foreign objects,” said Prof. Itai Shavit, head of the pediatric emergency department. “One can never know how a case ends. Every case teaches us how such incidents can be prevented and lives even be saved if parents and caregivers kept a more careful eye on their children.”

The doctors at Rambam are reminding parents to keep any toys or items with small magnets attached to them away from small children because they put them into their mouths and swallow them. They also note that parents should ensure that all game parts are returned to their containers, with none missing.

In addition, if you use small magnets to hold notes on the refrigerator door they should pushed up so that they are out of reach from little fingers.

If they are swallowed, take the child immediately to the nearest hospital emergency room.