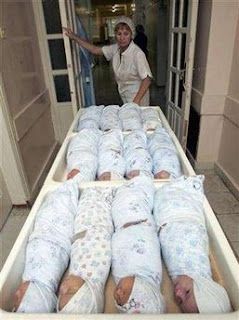 A small Dutch community has recorded a 44 percent rise in baby births nine months after a power cut plunged its 23,000 residents into darkness for two days.

In December last year, the blades of an Apache helicopter accidentally severed the high voltage cables providing electricity to the nine villages that make up the municipality of Maasdriel in the east of the country.

During the ensuing 50 hours of darkness, many inhabitants sought mid-winter hospitality in other towns, “but some found heat among themselves,” town spokeswoman Annelies van Eijkeren told AFP.

There were 26 babies born in Maasdriel in September — a 44 percent rise on last year’s 18, she added.

While authorities may want to boost the population, “we are not envisaging doing so by cutting the power”, said Van Eijkeren.