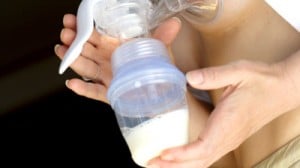 Abi Blake, a mother from the UK, has become a local celebrity for making and selling sweet treats that she makes using her own breastmilk. According to Blake, it is far better than using cow’s milk for baking.

Abi Blake makes cakes, smoothies, and lasagna all with her expressed breastmilk. The mother of an 8-month-old pumps milk after she breastfeeds her daughter and uses it for baking, not just for her but also her entire family. Blake also makes sweet cakes and creams from her breastmilk that she sells to others as a delicious, and healthy treats.

According to Blake, the health benefits of breastmilk makes it a smart choice to use instead of the typically used cow’s milk. She first came across the idea when she was visiting India and noticed that many women used their breastmilk in their cooking. Curious, Blake tried it herself and shared the results with her friends.

“Although the idea of eating something made out of someone else’s breast milk may make some people’s stomachs turn, it is full of vitamins that can never be found in cow’s milk. And why would you prefer to drink milk from a dirty cow over a clean, healthy woman,” Blake says.

Blake sells her treats at local food festivals to those who are willing to give them a try. Though many consider it a novelty experience, Blake insists that the benefits make it the better option. She also swears that breastmilk makes cakes taste better. “Breast milk is sweeter and slightly oily – it actually tastes of goodness, whereas cows milk just tastes of chemicals,” she says.