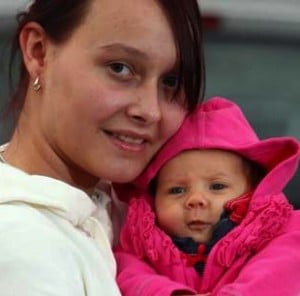 Two big congratulations are in order for 20-year-old Emma French of Livingston, West Lothain. Not only did she pass her driving test (after a fail back in March), she also delivered a beautiful baby girl that very same day.

Emma wasn’t due to deliver for another month, but on the morning of her driving test, at 4 am, her water broke. As the time for her driving test rolled around, Emma considered that the baby hadn’t come yet and, despite pleas from family members and friends, she decided to go ahead with the test.

“Everyone was telling me to go to the hospital but I had waited so long for my driving test, I was determined to do it,” Emma stated. “I knew I wouldn’t have another chance until the baby was a little older, so I didn’t tell my instructor or the examiner what was happening and just got on with it.”

And “got on with it” she did. She completed her test successfully, despite the fact that her contractions were only ten minutes apart. After she had her license in hand, she drove herself to the hospital instead of accepting the ride offered by family when she called her grandparents’ house to deliver the good news about passing her test.

“When I am determined to do something I don’t stop until it’s done, and it’s the same with this. It was really scary and everyone must think I’m crazy, but it ended up the way I had hoped,” Emma stated. “And one good thing about being in labor that day – it really killed my pre-test nerves,” she added.

After arriving at the hospital, Emma went through another six hours of labor before little Eva MacFarlane was born.

Once little Eva made her arrival, excitement started to stir about Emma’s feat earlier that day.

“The nurses at the hospital were very confused because I was getting congratulations cards for both my baby and my driving test. When I told them, they were all in shock. They couldn’t believe it,” Emma stated.

Scary is the one word that comes to mind, especially when you think about how everything could have ended up. But regardless of the way things could have turned out, little Eva is here. She and mom are doing very well and Emma is enjoying mommyhood.

“I am loving being a new mother. It’s the best job in the world,” Emma said, adding, “I can’t wait to tell Eva this story when she’s older and it’s definitely going to be one for the grandchildren.”