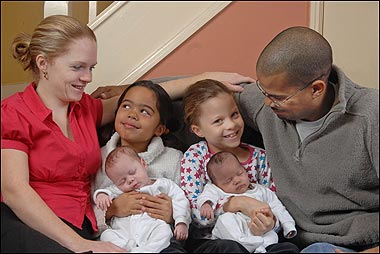 Their mixed-race parents Dean Durrant and Alison Spooner repeated the two-tone miracle after a seven-year gap.

When the first set of twins arrived in 2001, the couple were astonished to see that Lauren took after her white mum, with blue eyes and red hair, while Hayleigh had black skin and hair like dad Dean.

Then this year Alison, 27, found she was expecting again — and lightning struck twice.

She had twin girls again. And little Miya was born with dark skin like her dad and Leah is white like former recruitment consultant Alison.

The latest set of unique twins arrived on November 13 by Caesarean section after just 37 weeks of pregnancy, when scans revealed both were breach.

Doctor Carol Cooper, author of a book on twins, said there was a two in a million chance of a second set of twins like the Durrant girls.

“To have a second set of non-identical twins is unusual. It means the mum is very fertile.”