A UK mom who has two sets of reproductive systems has surprised doctors and the medical world by giving birth to a baby girl. 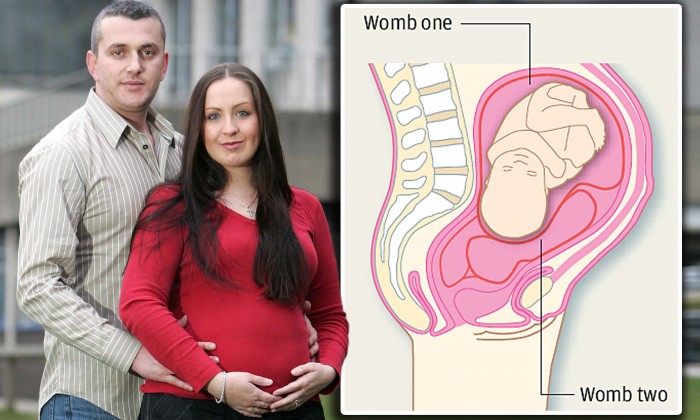 Lindsay Hasaj, who was diagnosed with a dual reproductive system or uterus didelphys in November, gave birth to Mirela Elizabeth by Caesarean section last week.

Although eight in 10,000 women have some form of uterus didelphys only one in a million have Lindsay’s anatomy, which is a double womb, double cervix and double vagina.

The unusual condition was discovered during a scan that she had two wombs, an anatomical irregularity that halved her chances of fertilization and complicated her pregnancy.

She had to have scans every two weeks and even the tiniest problem left her with sleepless nights and trips to the hospital.

Henry Annan, a consultant obstetrician and gynecologist and spokesman for the Royal Free Hospital, said:

‘The important thing is not to think of this woman as abnormal.

‘One in 1,000 women have a variation of some kind with their reproductive system, only hers is very rare.

‘With a pregnancy like this everyday complications such as premature labour and the baby not being born in a normal way can take on another dimension.

‘I would also reduce the chance of fertilization by 50 per cent. She’s done very well to conceive and give birth the way she has.’

Earlier this year a Michigan mom with 2 wombs welcomed twins, 1 from each womb.