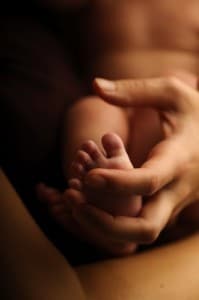 In Brazil, more than half of all babies are born via cesarean. This rate is even higher – 82 percent – for women that have private insurance. But the women of Brazil are trying to change the trend. Some are even participating in public protests so they can have a choice in how they deliver their babies.

“If I’d stayed with my health care plan and my doctor, I would have a C-section,” said Mariana Migon, a first-time who chose to abandon her health plan, obstetrician and private room for the free public hospital in downtown Rio. Here, she had a real chance to deliver her baby girl vaginally.

Experts say there are many reasons behind the country’s high C-section rates: a longstanding interventionist approach to vaginal births that often makes them more painful and longer than necessary, low pay rates for obstetricians, and more.

Moraes Filho of the Brazilian Gynecologists and Obstetrics Association says that, for doctors, economics and familiarity play a big part in the decision on whether to deliver vaginally or by cesarean. Women in Brazil expect to have their doctor when it comes time for delivery, not the doctor on call. Health care plans pay nearly the same rate for C-sections and vaginal births.

“We have to change this culture, and get women comfortable having their child with the doctor or nurse on duty,” said Filho. “It’s not that doctors are mercenaries, but what they earn to be present for a very important moment is little more than what a television repairman gets who shows up on his schedule. This doctor-patient connection where the woman wants her doctor present, the poor remuneration for doctors, their need to juggle several jobs – this all makes it impossible for a practitioner to reconcile his work schedule with unpredictable vaginal births.”

Maria do Carmo Leal, a researcher at the National Public Health School at the Oswaldo Cruz foundation is currently analyzing a survey of 24,000 birthing mothers across the country. She says that the high rates reflect a medical culture that treats childbirth more like a health problem, rather than a natural and beautiful process.

“Here, when a woman is going to give birth, even natural birth, the first thing many hospitals do is tie her to the bed by putting an IV in her arm, so she can’t walk, can’t take a bath, can’t hug her husband. The use of drugs to accelerate contractions is very common, as are episiotomies,” she said. “What you get is a lot of pain, and a horror of childbirth. This makes a cesarean a dream for many women.”

And in private clinics, a dream is exactly what women get. Rather than having a birthing experience, they have an experience that is more akin to a weekend retreat at a five-star hotel. The Perinatal clinic in Rio, for example, provides free hairstyling, manicures and makeup sessions to moms and moms-to-be. For an additional fee, rooms can be decorated with a safari or teddy bear motif. Even a catering service, complete with waiters, is offered to moms when they are ready for visitors.

“There are patients who absolutely refuse to have natural childbirth, well-informed patients who maintain this position out of fear,” said Paulo Marinho, medical director at the Perinatal Clinic. “It’s a cultural situation. I’ve seen it develop over generations.”

Brazil’s federal government has invested $1.3 billion in the last year and a half to try and reverse the trend of C-section deliveries through a program called “The Stork Network.” Their goal is to “humanize” the birth experience and educate mothers and practitioners on the health benefits of vaginal delivery.

Program efforts have included creating hospitals that are focused solely on pregnancy, birth and post-partum care; speaking to private health care companies to discuss birth options; educational campaigns that are geared towards helping soon-to-be moms better understand the pros and cons of C-section deliveries; and propositions to revise curriculums in medical schools to highlight the risks of C-sections as well as the benefits of natural delivery.

A similar program in Rio has invited all mothers in the public health system to visit the hospital where they will give birth. At that visit, they are presented with a question: C-section or natural birth. Women like Claudia Larissa have heard more about their options at visits like this, and she says that she is willing to give vaginal delivery a try.

“I have to admit, I’m not calm at all,” Claudia said. “It’s my first time and I’m anxious. I’m very afraid of the contractions. But this helps. I can see this was made for us, this space is for mothers. I know the staff will be here for me.”

Claudia’s mother, Zelia Leite Alves, attended the visit with her daughter. She tried to convince her daughter that a C-section was best.

“I never wanted a natural child birth, no way!” Zelia said. “I wasn’t born to feel that kind of pain.”

But Zelia’s opinion may soon be a thing of the past. More women, those that are educated on their birthing options, are starting to speak out. They want more of a say in their delivery. They want to have the same options as other women in the world: to decision to use midwifes or medical doctors, to have home births, C-sections or vaginal births are often decided for the women of Brazil.

The big protest occurred right after a medical regulating agency in Rio forbid home births conducted by medical doctors or doulas. The agency reasoned that “there are many complications possible during labor that require immediate medical attention.”

This restriction prompted a huge response in 13 different cities. Sao Paulo women bared their breasts and carried posters that said “Our Children, Our Decision.” Some even enacted natural births using dolls with the words “Born Free.”

This rebellion prompted a reversal in the prior restriction. Women celebrated in Rio with more banners and painted bellies.

In 28 other cities, women have gathered to defend their right to reject episiotomies and to have company present at the birth. A 2005 law says that women should be able to have this person present, but the law is often disregarded.

“We need to have a serious discussion in this country to see what can be done to change this culture,” said Filho. “Women are starting to rebel, and they should.”

While the World Health Organization says that there are no ideal C-section rates, the percentage should be somewhere between 10 and 15 percent. Very few countries meet this ideal, but Brazil, by far, has one of the highest C-section rates in the world.

C-sections carry a great deal of risks for both mother and baby. Mothers are more prone to infection, anesthesia complications, blood clots, and hemorrhaging.  Healing time is also longer with a C-section than with a vaginal birth. Babies are at a higher risk for premature birth, lower health scores and breathing problems. Babies are also deprived of the stimulation ordinarily received during a vaginal birth.