Home » Youngest Baby in UK saved by a Heart Surgery 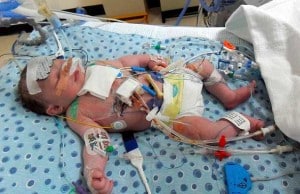 Baby Toby was just 22 hours old when he was whisked into the operation theatre for a heart surgery. Determined to give her unborn child a chance, his mother had earlier refused to terminate the pregnancy when doctors told her that he had a life-threatening heart condition. Believed to be the youngest baby in the UK to undergo the critical surgery, baby Toby is now home and doing well.

Sophie Dring a nursery nurse from Whitby, North Yorkshire, was 21 weeks pregnant when an ultrasound revealed that her baby had hypoplastic left heart syndrome, a condition which affects one in 5,000 babies where the left side of the heart fails to develop.

A doctor at Leeds General Infirmary advised Sophie to terminate the pregnancy to save the new mother of all the pain later.

Says Sophie that there were three alternatives given by the doctor, ‘Terminate the pregnancy there and then, do nothing and watch him die, or have him and watch him go through all the surgery. Her advice was to terminate because she didn’t want me to go through it all. I was in floods of tears.’

But Sophie wanted to give her unborn child a fighting chance and she therefore decided to go for the surgery. The Leeds hospital though did not have specialists for the operation and after a search, Sophie narrowed it down to surgeons 100 miles away in Newcastle upon Tyne.

On September 8 at 39 weeks Toby was induced at Royal Victoria Infirmary and transferred immediately to the Freeman Hospital, where consultant surgeon Asif Hasan and his team were ready.

The baby was 7lb 1oz when he was born but his condition was so serious that instead of waiting for a week to let him grow stronger, the doctors decided to operate upon him immediately, even before he was a day old.

Said Sophie, “The operations those surgeons do on such tiny babies is simply amazing, and he was in for 12 hours when they initially thought it would only take six.”

The operation was a success.

“It was distressing to see him covered in wires when he was brought out of theatre and stabilised, and there were so many machines attached to him.”

The baby, now 10 weeks old, is much better and responding well. He will need another operation before Christmas to fit him a cardiac catheter and then again when he starts walking. Later, Toby will need a heart transplant.

‘It could be in his 20s or 30s, it’s hard to tell,’ added his mother. ‘All that matters is that he is alive. After finding out his diagnosis I never thought I’d be able to hold him in my arms and cuddle him, but here I am and it’s all down to the Freeman Hospital.’

A spokesman for Leeds Teaching Hospitals clarified their position and said, ‘The policy of our cardiologists is always to give families open and honest advice about the options available to them as well as the risks and chances of survival. For unborn babies with conditions like Toby’s there are three options for parents to consider, only one of which is termination.’

Toby is probably the youngest baby in the world to undergo a crucial life saving operation but his mother feels that the records do not matter.

“But to me records don’t matter too much,’ said Sophie. ‘What’s more important is that he’s here – and he’s alive.’