Home » Strangers Help Save the Life of 8-Week-Old Infant

Few things bring a community together quite like a baby . . . and sometimes, you’re just in the right place at the right time. A prime example is the recent plight of an 8-week-old Ottawa infant. 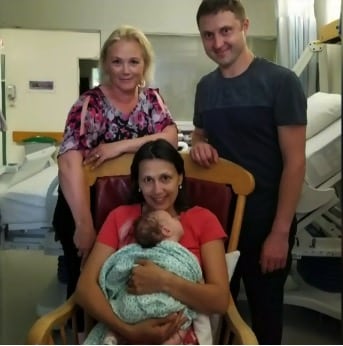 His parents had been driving when he suddenly stopped breathing. Frantic and frightened, they pulled over to the side of the road, called for assistance, and then started screaming for help as the dispatcher walked them through CPR.

Their cries were first heard by Geraldina Cavalgo. A support worker with CPR training, she was driving past the family when she noticed the baby’s head down. She hit her brakes and ran to help.

“When I came, the baby was completely purple,” Cavalgo told CTV News.

She took over CPR for the distraught parents.

“I was yelling, ‘Baby, come on. Stay with us, stay with us.’ And after a while, the baby came [to] and started to react.”

The next person to stop was David MacKaviy, a bylaw officer who also teaches CPR on the side. When he arrived, the baby was breathing again, so he took it into an air-conditioned vehicle and monitored its vitals. Meanwhile, several other passersby called 911, and one of them even sprinted to the fire station to alert the workers there.

“We jumped in our rig and grabbed our stuff and away we went,” one fire official said.

Firefighters administered oxygen while they waited for an ambulance to arrive. When they got there, the child was rushed to the Children’s Hospital of Eastern Ontario.

Paramedics say, had it not been for the swift response of the community, the baby might not have survived.

“What happened there is everyone worked as a team and the baby was successfully resuscitated,” paramedic Marc-Antoine Deschamps, told CTV News.

The parents also let CTV news know that their baby was doing okay, and they said they would love to meet the people who helped to save their baby – under different circumstances, of course.