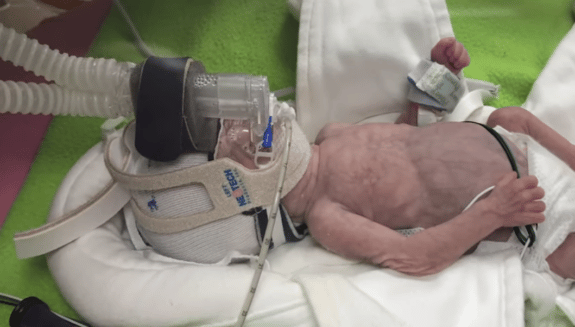 Emilee Wendzik arrived at the hospital in June with abdominal pain thinking the doctors would put her on bed rest.  Hours later they were wheeling her into the OR to deliver her baby.

When Harper was born her weight was so low the nurse thought the scale was broken dad Patrick Schultz said in a video posted by the hospital on Youtube.

Staff at the hospital were, however, overjoyed by Harper’s growth and progress.

“This is the smallest baby that we’ve ever resuscitated, ”  Neonatologist Martin Nwankwo said. “To see her grow from where we started.  Going home now in reasonably good shape is mind-boggling for us.  We have never done this before.  To be honest, half the hospitals in the United States would not have attempted this.”

Harper’s name is a combination of Emilee and Patrick’s grandmother’s names, whom the pair lost this year.  For them, she is the gift they needed this year.

One hundred and twenty-eight days and 6 pounds later, Harper headed home.  She will need some oxygen but her thankful she will be home for the holidays.

There were hugs, well wishes, and a few tears when the hospital staff said goodbye to the family.

“We love our babies very, very much and we are always so happy when they get to go home,” said Dr. Renae Reisig, a Pediatrix-affiliated Neonatologist at Covenant HealthCare.