A couple, who have been married for 30 years, have shocked many by becoming parents again. Double the congratulations are in order for 46-year-old Rathinam and her 81-year-old husband Perumalsamy after welcoming twins on Nov. 16 through assisted reproductive technology (ART). 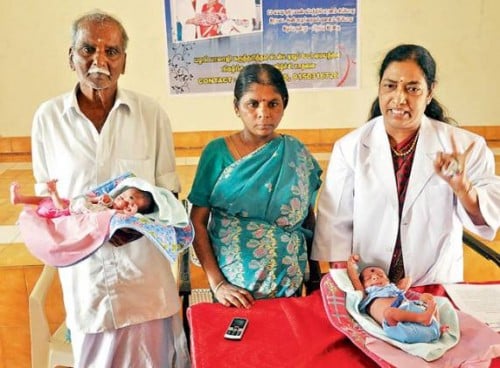 The babies arrival is bittersweet for the couple, who lost their only 23-year-old  son in a road accident in 2003. Since then, Perumalsamy has wanted another baby but his advanced age dashed his hopes of having an heir.

A consult with the infertility specialist at a local Fertility Clinic, however, revealed that Perumalsamy could still become a biological father albeit through ART.

“Shattered by the unnatural death of their only son, the man decided to go for test tube baby. They were evaluated and prepared for the treatment. In the process, embryo transfer was done to Rathinam in March. The treatment proved successful and Rathinam’s pregnancy was confirmed by blood test and ultrasound scan the following month,” said Dr Senthamaraiselvi.

Age takes less of a toll on a man’s reproductive ability, while fertility potential is restricted in a woman. Because Rathinam had already started menopause doctors opted for an in vitro fertilization procedure called Intracytoplasmic Sperm Injection (ICSI) to help her become pregnant.

The mother is thrilled with the babies’ arrival.

“Considering my age and health condition, I was given high risk pregnancy care. Now, my babies are healthy.”