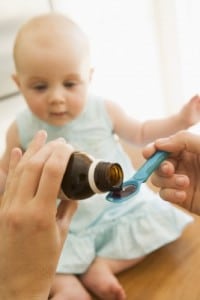 Like many parents I grab for the Motrin when either of my boys come down with a fever thinking it will help make them feel better quicker.

But now the American Academy of Pediatricians (AAP) is recommending against grabbing for the meds. A new report published this month in Pediatrics states that not only is there no need to bring down a fever in an otherwise healthy child, but there is a downside to treating a fever.

The only reason to treat a fever is to make a child more comfortable, a co-author of the report said.

“In a normal child there’s no set temperature at which you’d need to treat a fever,” said Dr. Janice Sullivan, a professor of pediatrics and pediatric critical care at the University of Louisville. “Our recommendation is primarily to treat discomfort associated with an illness rather than the fever itself. So, when children are uncomfortable or crying, then you should treat them with medication.”

Dr. Sullivan and her colleagues found that there was no evidence that a fever by itself could harm a child – unless they were under the age of 3 months or had heart problems. In fact, they determined that bringing fevers down could actually prolong illness. That’s because fevers are one of the body’s lines of defense against viruses, Dr. Sullivan explained.

“Studies done in children with chicken pox, for example, found that children whose fevers weren’t treated had about a day less that they were considered contagious compared to those who were treated,” she said.

The study revealed that parents are often concerned with the need to maintain a “normal” temperature in their ill child and that many administer antipyretics(medications to reduce a fever) even though there is either minimal or no fever.

The AAP website offers this information for parents if their child has a fever:

They also note that while there is ‘some evidence that combination therapy (alternating doses of ibuprofen and acetaminophen) may be more effective at lowering body temperature, questions remain about whether it is safe and whether it helps children feel more comfortable. Combination therapy also increases the risk of inaccurate dosing.’

A fever has traditionally been defined as a rectal temperature over 100.4 F or 38.0 C. Temperatures measured at other sites are usually lower.

WebMD says you should call your child’s doctor if any of the following are present with fever.

Above all, always consult your doctor if you are concerned about your child’s health.