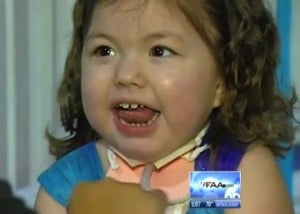 For the last two and a half years of her life, little Adalynn Willett has not known any other home than the Cook Children’s Medical Center in Texas. Finally on Tuesday after fighting a life threatening illness and spending 850 days in the hospital, Adalynn headed home with her parents, for the first time.

When Serafina Sevallos was pregnant, it was found that her unborn baby had an Omphalocele, a birth defect of the abdominal wall in which the intestines, liver or other organs stick outside the body through the navel.

Doctors told  Serafina and her partner Bryan Willett that their little girl may have to spend a few months in the hospital after she was born. But the months turned to years and baby Adalynn eventually spent at total of 850 days in the hospital.

During her stay, she underwent an incredible 28 surgeries, which was an average of 1 operation per month.

An Omphalocele is extremely rare defect that affects just 2 in every 10,000 babies.

It is associated with a high rate of mortality (25%) and severe malformations, such as cardiac anomalies (50%) and neural tube defect (40%). Approximately 15% of live-born infants with omphalocele have chromosomal abnormalities. 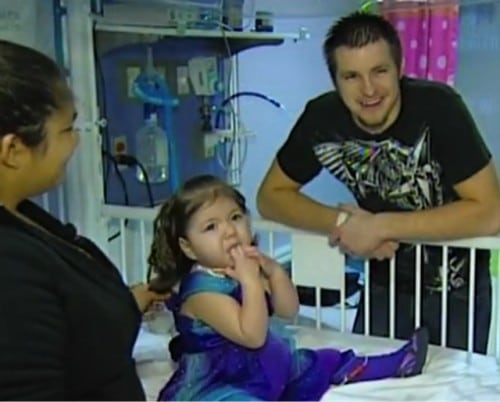 To help Adalynn survive, doctors had to cover the organs outside with an man-made pouch and then the organs were gradually pushed back inside.

Most children who go through the surgery recover fully. But Adalynn had her daily challenges. Her heart stopped twice during the procedure and she also battled many infections.

Last week the chubby little toddler finally said goodbye to her hospital home and trotted out of the ward in a purple sparky dress. 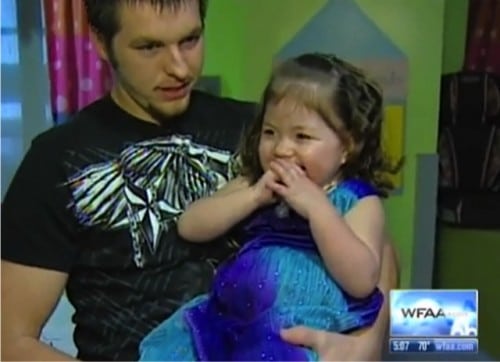 She will be continued to be monitored as she has a tracheotomy to offset pressure put on her lungs by her intestines. She will also be fed through a feeding tube until next spring when flu season has passed and there are no chances of her getting an infection.

Her father Bryan told WFAA: “I never thought we were going to make it this far. I always hoped for it, but I never thought this day would come. It is a very exciting day.”

This Christmas is truly going to be a special celebration for the family.