The story that both shocked and captivated the world last year has now come to a heartbreaking end. The little girl, Luz Milagros, who was found alive after spending more than 10 hours in the morgue has passed away.

It all began last year when Analia Bouter gave birth to her fifth child. Born three months prematurely, little Luz was pronounced stillborn. Doctors transported the little girl to the morgue, placed her in the coffin and then put her under refrigeration. More than 10 hours later, Analia and the baby’s father, Fabian Veron, were finally granted permission to see their daughter. After touching her tiny hand, a miracle happened. The baby girl started crying!

But little Luz was, in fact, alive.

“I can’t explain what happened,” Fabian had told Associated Press. “Only that God has performed a miracle.”

Over the next few days, it seemed that Luz was improving. But over the next 14 months, Luz would suffer from a number of health complications. She had developmental problems, including microcephaly for which her parents were trying to raise money for a stem cell treatment in China. Then on Sunday, she went into cardiac arrest. She remained in critical condition until passing away at 1 p.m. later that day. 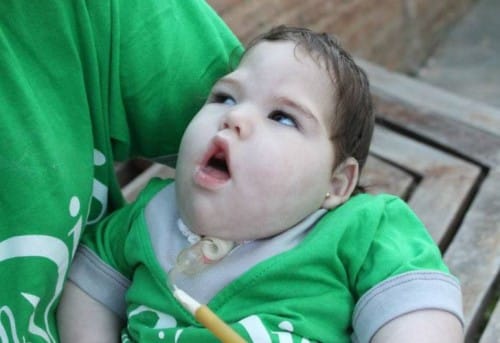 Prior to her passing, a full investigation was done on the hospital’s proceedings regarding Luz and her mother. All workers that had been involved in the case were suspended until the investigation had been completed. According to Dr. Hose Luise, the hospital’s director, Luz had no vital signs after birth; this was confirmed through both himself and a neonatal physician. Again, her vitals were checked before two morgue workers placed her in the coffin inside the morgue.

The only conclusion that doctors could come up with was that maybe the colder temperatures had somehow altered her metabolism and helped her survive. Whatever the reason, her death is one of the saddest we have shared. She’d fought so hard for so long, and now her parents and four siblings have lost her not once, but twice. Our hearts go out to this family during this time of immense pain and sadness.