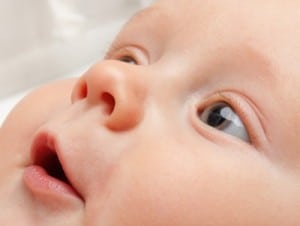 Children have an unusual knack to pick up languages and now scientists believe that they are not only quick learners but also understand the complexities of a language much better than adults. According to a new research even a 3 month old can understand the sophisticated usage of a spoken language better than an adult!

Scientists Jutta Mueller, Angela D. Friederici and Claudia Maennel have found that the complex rules of a spoken language are understood by babies and children far more easily than by adults.

For their study, the team played a stream of syllables to babies for 20 minutes while measuring their brain responses using electroencephalography (EEG). A pair of syllables was separated by a third syllable placed in between them.

Jutta explains that in any spoken language non-neighbouring words of a sentence might be dependant on each other even if there is a word or words between them. Eg. in the sentence “The boy always smiles”, the third-person-suffix “s” of the verb is dependent on the noun “boy” though the two are separated by the word always.

They found that babies could make out this anomaly.

“EEG measurements showed us that the babies recognized this rule violation”, Mueller explains.

Additionally the scientists also changed the tones of the syllables and found that only those infants whose brains reacted to pitch changes in a more mature way could detect the syllable dependencies.

When the same experiment was conducted on adults it was found that the grown ups reacted to the rule violation in the sequence of the syllables only when they were asked to specifically look for the dependencies of the syllables.

They conclude that, evidently, the automatic recognition ability is lost later on.

“What we found particularly interesting is that the small group of adults who did show evidence of rule learning also showed a stronger brain response to the pitch changes.”

The study shows how children have an ingrained ability to learn language quickly and also recognize the complex grammar, pattern etc. of spoken languages without any additional effort.

In a follow-up study, the team now hopes to investigate if the changed brain pattern of children when they hear the pitch changes and the difference in syllable patterns aids them in long term language development.