Like a scene from a Hollywood horror movie, stunned onlookers watched as Grenfell Tower in London was engulfed in flames. Helpless crowds below watched as faces appeared in windows along the higher floors and people screamed for their lives. 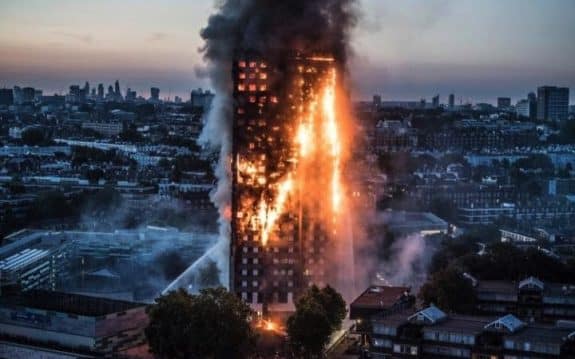 As flames moved relentlessly through the building, huge chunks of a polystyrene-like material rained down on the horrified people below. Many of those people were on their phones calling 911 and begging for help, but there was little else they could do beyond praying that firefighters would be able to get to those trapped in their apartments in time.

The fire spread fast, and the death toll is estimated at at least six, with more than 74 hurt.

Many below witnessing this inferno also saw a “miracle catch.”

Samira Lamrani says that she saw a woman try to save her baby by dropping it from a window “on the 9th or 10th floor into the crowd below.”

As people appeared at the windows, frantically screaming for help, the woman gestured to the crowd to indicate that she was going to throw her baby out to save it. A man dashed forward and miraculously grabbed the baby out of mid-air. The child was not hurt.

Another resident who had escaped the building saw a woman throw her son, a boy about five years old, from a window on the fifth or sixth floor. The child had some broken bones but is expected to recover from his injuries.

The faces and voices of those screaming for help that couldn’t reach them – some of them children – will haunt the people who stood below watching this tragedy unfold. One woman said “We were looking up, and there was nothing we could do. We couldn’t do anything.”