A five-month-old girl named Ebrar, the child of a Syrian refugee who settled in Winnipeg, underwent a nine hour surgery at Children’s Hospital on Tuesday. 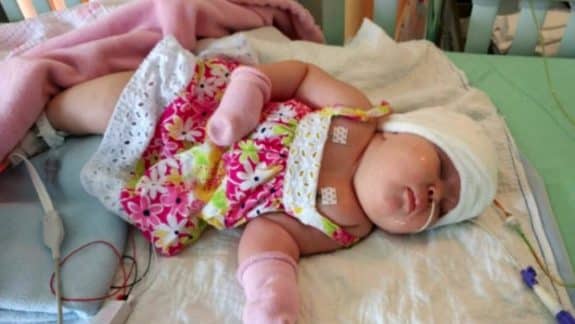 Ebrar was born with a rare birth defect called encephalocele that caused her brain to grow outside of her skull. Her mother Safaa was six months into her pregnancy when doctors told her it was likely that her baby would not survive after birth. They suggested that she terminate the pregnancy, but Safaa didn’t for religious reasons and has no regrets about her decision.

The surgery the infant required is high risk with a 50/50 chance of survival, but it was also Ebrar’s only chance for a healthy and normal life.

Pre-surgery there were weeks of CT scans and MRI’s, along with numerous appointments with neurosurgeons. In the long surgical procedure, doctors drained the fluids surrounding the baby’s brain before inserting it back inside of the skull. The baby is breathing on her own, but it is still unclear how she is recovering and she remains in intensive care. Doctors must wait for additional results from more MRI’s and CT scans to determine how the surgery affected Ebrar’s brain, but it may be another two weeks before they know.

According to the Centers for Disease Control and Prevention (CDC) about 375 babies in the US are born each year with encephalocele. The cause of the defect is unknown. Surgery to correct it ranges from simple to complex depending on how much of the brain tissue is outside of the skull.

In some cases the child can have lifelong neurological  development problems. Seizures can be common in children with encephalocele because the electric signals going to the brain may not have developed normally. It’s also emotionally difficult for families who are affected by this birth defect, particularly because the cause is unknown and the cases are often dramatic.

Safaa understands that there will be big challenges ahead but is hoping for the best and anxious to bring her daughter home.