Home » Baby Flies Out Of SUV Onto Texas Roadway

A car seat is only effective IF it’s installed in the vehicle AND the child is buckled in.   One Texas family is lucky their child walked away with scratches after the seat she was sitting in fell out of their vehicle as they were driving.

A dashcam video on Wednesday showed the toddler fall out of the moving vehicle as it turned right on to a busy street in Laredo Texas. 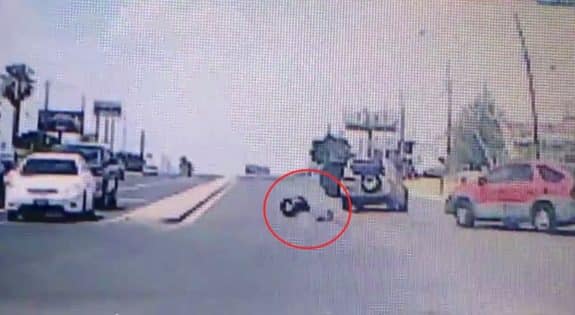 With cars turning in all directions, the child is lost from the sight of the camera before the parents jump out of the vehicle to grab the seat and little one off the road.

Claudia Alanis, the driver who caught the incident on camera told KSAT News she was headed back to work from lunch when she saw the situation unfold.

“When we started pulling forward, we got to a red light and there were some cars passing by — the second vehicle in the video shows the door opening as soon as they’re making a small turn, and mid turn the door flew open,” Alanis said. “The kid fell out along with his car seat a few steps away from him and (drivers in the area) noticed right away that the baby had fallen out.”

Another motorist also got out of their car to help the child after Claudia began honking to get other drivers’ attention.

“(The baby) just ran into the stranger’s arms,” Alanis said. “The woman on the passenger’s side, I believe is the mom, got (out) of the vehicle crying and ran toward the baby.”

The mom, 26-year-old Jocelyn Nicole Hernandez, was cited for having an unrestrained child younger than 4 in the car and the 1-year-old was treated at the scene for scrapes sustained from the fall.