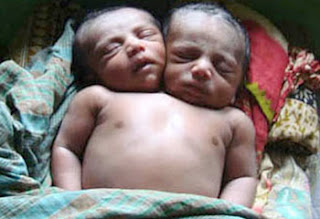 UPDATE: Kiron passed away after his parents took him home because they could not afford medical care.

A baby born with 2 heads has caused so much curiosity that he is now under police protection.

150,000 local curiosity seekers turned up at the clinic in Bangladesh after word got out that where he was born.

“He has one stomach and he is eating normally with his two mouths. He has one genital organ and a full set of limbs,” gynaecologist Mohamad Abdul Bari said.

“He was born from one embryo but there was a developmental anomaly.”

The clinic had been unable to determine whether the baby had one or two sets of vital organs, Dr Bari said.

The baby’s life was not in immediate danger but he and his mother, 22, had been moved to a larger hospital in nearby Jessore city because large crowds had gathered at the clinic, he said.