A 7-year-old Brooklyn girl definitely had angels watching over her yesterday when she ventured out the window of her apartment and plunged three stories towards the concrete below.  Thankfully an off duty New York City bus driver was close by and able to catch her before she hit the ground. 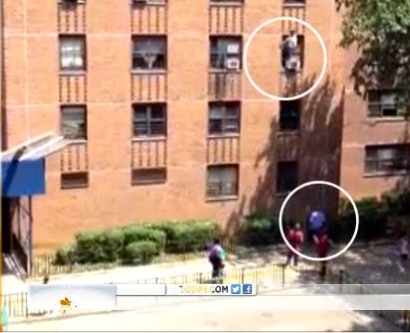 Stephen St. Bernard, was heading home to Coney Island from his job at about 2 p.m. when he heard screams coming from a building courtyard.   He rushed to find a girl standing on top of a third-floor window air conditioning unit.

“She just stood up there teetering, teetering,” he said. 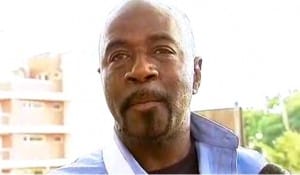 Initially, he shouted up to her to go back into her apartment, but suddenly she just fell.

“I think about my daughter, and you know, she’s a little kid.”

Positioning himself perfectly the girl landed in his arms before he fell forward.

“I picked her up and carried her, and I was holding her, rubbing her, and she just more or less kept looking around,” he told news crews “She never closed her eyes, she didn’t lose consciousness.” 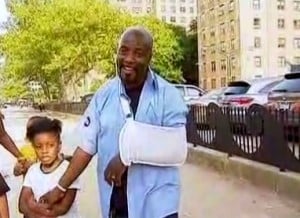 The little girl was taken to Coney Island Hospital with very minor injuries.

“He’s my hero,” said the girl’s aunt, Monique Harding. “He definitely did our family a favor today.”

Her mom was home but looking after her other children.  Police believe that the girl has autism, which could mean that she may not have understood what would happen if she jumped.

Her hero, who is also dad to a 7-year-old girl, sustained a torn tendon in his shoulder but he is expected to be okay.