Watching anyone in a family battle cancer is difficult. For Ben and Shelby Offrink, that battle is a joint effort, not just because they are a family, but because they both have their own form of the disease. Thankfully, they don’t have to do it alone; they have an entire community behind them, willing to help in any way that they can. 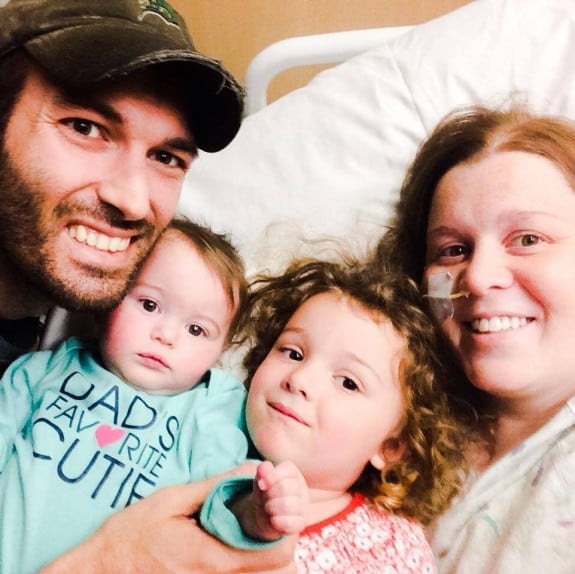 “They are just great, awesome people,” Sheila Bunker, a friend of the family, told MLive. “Just super, down-to-earth, awesome, fun people that you would invite over to your house any day of the week.”

These awesome people met while Shelby was studying chemical engineering at Western Michigan University. After they got married and had children, Shelby worked at Stryker while Ben stayed home with their first child. Then, after their second child, Hazel, was born, Bunker came to the Offrinks’ home to take family photos.

Shelby had mentioned to Bunker at that time that she’d still been having lower back pain. She thought, at first, maybe it was linked to the pregnancy, but just a few weeks later, Shelby was diagnosed with a rare and deadly form of cancer, glioblastoma of the spine.

While undergoing treatments, Shelby had to cut back at work. Eventually, she had to leave her job. Then the cancer caused paralysis of her lower spine. Ben and his father worked to build a wheelchair ramp and widen the doorways of their home.

But then, last year, cancer hit the family a second time.

Ben, who had been in remission after battling Hodgkin’s lymphoma, had relapsed. He started undergoing chemotherapy treatments to prepare for a bone marrow transplant.

“It’s tough to see. Your heart goes out to them,” Andy Graham, a long-time friend of the family, told MLive.

And things would only continue to get worse for the couple. Last month, Shelby underwent an MRI that found three new tumors in her brain. She’s not being treated at Spectrum Health where doctors are analyzing tissue samples to try and determine what chemotherapy might best target her form of cancer.

Yet, despite their struggles, this family is still holding on. And they have an entire community working behind them, holding fundraisers like an upcoming spaghetti dinner to ensure that, whatever the family needs—day care, gas cards, money to pay bills—they have it. That help has floored the couple, Graham said . . . but he says that none of their friends, or anyone in the community, are surprised by the amazing outpouring of help.

“If the roles were reversed, and Ben and Shelby were on our side of the fence, they would be at the forefront of the charge,” Graham said. “Shelby just goes a mile a minute, and Ben has the biggest heart.”