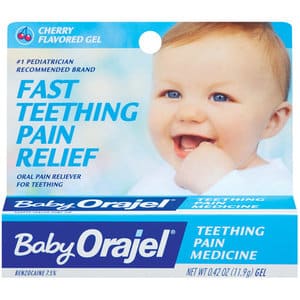 For as long as I can remember the standard remedy for a fussy teething baby was Benzocaine, a local anesthetic is found in over-the-counter products such as Anbesol, Orajel, Baby Orajel, Orabase and Hurricane.

Parents and caregivers often use these gels and liquids to relieve gum and mouth pain. The FDA, however, is warning that the use of these products in children under 2 years old can lead to a rare but potentially deadly condition called methemoglobinemia, in which the amount of oxygen carried through the bloodstream is greatly reduced.

Since 2006 the FDA has since received 29 reports of benzocaine gel-related cases of methemoglobinemia. Nineteen of those cases occurred in children, 15 of them under 2 years of age.

The FDA also noted that parents may have difficulty recognizing the symptoms of methemoglobinemia, which include: pale, gray or blue-colored skin, lips and nail beds; shortness of breath; fatigue; confusion; headache; light-headedness and rapid heart rate.

Symptoms can occur within minutes to hours after benzocaine use, and after using the drug for the first time or after several uses. Parents should immediately call 911 (or the local emergency number outside the United States) if a child has symptoms of methemoglobinemia after being given benzocaine, the FDA said in the news release.

As an alternative the American Academy of Pediatrics suggests that parents give a child a teething ring chilled in the refrigerator, or use a finger to gently rub or massage the child’s gums.