Most people know about severe combined immunodeficiency – a genetic disorder – from the story of David Vetter, a young boy who had to live 12 years in a plastic bubble in the 1970’s.

Today, not many places screen for this gene defect even though that’s the only way to find it in time for life-saving therapy. Ontario is one of the few places in the world that conducts early screening through heel prick tests. Felix Quiring was just two weeks old in December 2014 when his parents learned that he had this genetic disorder that makes contracting simple viruses like the common cold a life-threatening event. 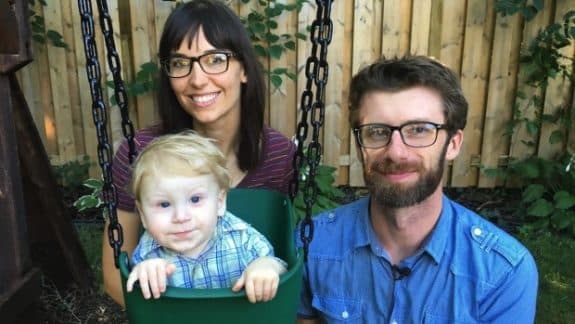 In London, Ontario, the little boy spent five months in a sterilized hospital room while parents Kathleen and Ben stayed close. To visit him they had to wear gowns, rubber gloves, and face masks. He was finally strong enough to go home in April 2015, but still lived with restrictions and isolated in a sterilized bedroom.

As Felix struggled, a clinical trial for a new gene therapy was underway in Los Angeles. The trial has so far treated only 15 children and in July little Felix became patient number 14.

Doctors in LA harvested the boy’s bone marrow and treated it with the enzymes that were needed to rebuild his immune system before putting the marrow back into his tiny body.

Dr. Marina Salvadori of London Health Sciences Centre says that “it is a real miracle.” Over the course of a year Felix’s immune system has become normal, and while he’s not yet at 100%, he’s very close and expected to have a fully restored immune system. In fact he will receive his first vaccinations in a few weeks. That’s a milestone his mom looks forward to because once the child is fully vaccinated he should be able to do all of the things that kids his age normally do.

His parents still avoid bringing him to areas with large numbers of children to minimize exposure to viruses like chicken pox, but Felix is now able to go to the park and grocery store with his parents, and he’s even fought off two colds since receiving his treatment.

During that first frightening year after his birth, Kathleen and Ben were unable to touch their child’s skin, or to kiss and cuddle him but that’s all changed because of the gene therapy.

His mom says that finally being able to hold and kiss her little boy is “something I will never take for granted.”

She has written about her family’s experience on her blog Becoming Peculiar.