UPDATE Monday February 9th, 2015: Health Officials revealed the day care center has had two more measles diagnoses: one baby and one adult.  All seven measles patients are unvaccinated, according to the Cook County Department of Public Health.

ORIGINAL POST: In the wake of a measles outbreak in California, and a heated debate on vaccinations, 5 more children in Illinois have become infected with the illness. According to the Illinois Department of Public Health, infants who attended a Chicago-area day care have been diagnosed with the sickness. 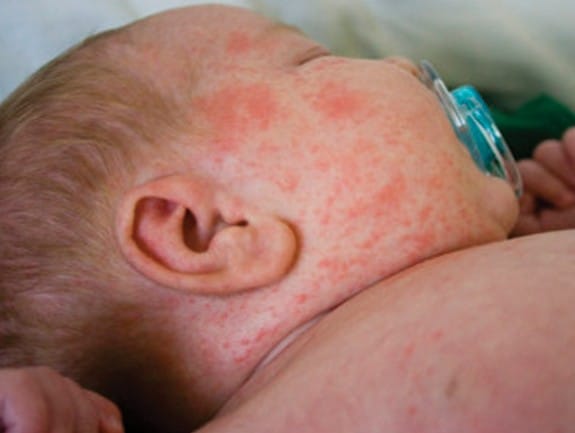 Laboratory tests that were run on the infants confirmed two of the cases, while the other three laboratory results were still pending. However, the children have been diagnosed with the illness based on the epidemiological criteria for measles. Healthcare officials believe that this is just the beginning, and warn that an outbreak may spread and grow.

Dr. Terry Mason, part of the Cook County Department of Public Health said, “We’re talking about a highly contagious disease, one that is particularly threatening for those people who have not been vaccinated. There’s likely to be more cases. We shouldn’t be surprised by that.” Children who are younger than 12 months of age are far more susceptible to the virus because newborns are not typically given the first dose of the measles, mumps and rubella vaccine until they reach a year old. Health officials do not know the cause of this outbreak as of yet.

So far, the outbreak has already infected over 100 people in a total of 14 states. Healthcare officials are in the process of determining if this new outbreak in Illinois is related to the California cluster of illnesses. An adult within the same county was diagnosed with measles earlier in the month, however, health officials do not believe that the cases are linked in any way.

In addition to the four children who were diagnosed with the illness, another seven to ten children who did not receive a vaccine yet that may have been exposed to the virus in the daycare are also being monitored. Within the last five years, prior to this particular outbreak, there had only been 10 cases of the measles, according to Dr. Rachel Rubin of the Cook County Health Department. Rubin spoke at a press conference, saying, “These were sporadic cases. We haven’t seen anything like this in many years.”

A spokeswoman for KinderCare, the daycare the children attended said that the facility has been cooperating and working closely with the county and state health departments in order to best respond to this outbreak. Part of the statement from KinderCare read, “We wish both children a speedy recovery and are hopeful they will be able to rejoin us in the center soon. We are following Public Health officials’ guidance and excluding unvaccinated children and staff who may have been exposed to the virus from our center.”