I’d heard about the once-a-month cooking moms and I’d always envied them. Their meticulously organized freezers were, to me, proof of the difference between a working mom and a non-working one. I didn’t have the time to plan an entire month’s worth of meals, all at once, let alone chop and prep them ahead of time. Not for seven people. Not with my schedule.

But I tried it anyway.

I had to, really.

Our teenagers were trying to eat us out of house and home. Their appetites were growing and they often grabbed items that were meant for meals as snacks – not because there weren’t snacks available, but because the item they’d chosen sounded tastier. (Why make apple slices when you can have a bacon sandwich instead?) Needless to say, we family were blowing through our monthly food budget pretty quickly – sometimes within the first week.

I had more control over what got cooked when, and other than the fresh items and things that we’d run out of (milk, bread, etc.), everything we needed for the month had already been purchased. Staying under our food budget had never been easier. It was also nice to wake up in the morning, knowing that I already had a meal thawed, ready to dump in the crockpot for dinner. And when I got home from work, it was sitting there, waiting to be eaten. It honestly eliminated a lot of the stress and guesswork that goes with meal planning for such a large family.

But it wasn’t all rainbows and butterflies. There are challenges that no one talks about – some of which were almost deal-breakers for me. Thankfully, I did put a lot of time and energy into the process and have come up with a few solutions that I can use to make it work better for our family in the future. If you’re looking to do the same, perhaps my experience can help. At the very least, it might give you an idea if once-a-month cooking may be right for you. 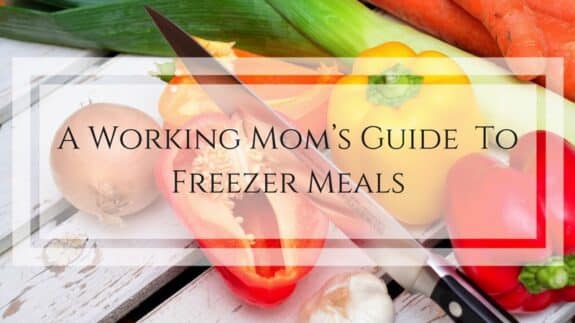 Pre-Made Meal Plans Are Rarely Worth the Cost

One of the biggest reasons I’d been drawn to the once-a-month cooking trend had to do with the pre-made meal plans that several websites are offering. Unfortunately, after buying almost a dozen of them, I found that they are rarely worth the cost. Sure, you can easily print off the recipes and shopping lists, but odds are, there are going to be meals in there that you and your family are not going to like. The more people you’re feeding, the more likely you are to run into this issue – and it’s even worse if you have picky eaters or children with sensory issues and food aversions. Some programs do offer substitution options, but even then, you’re not always guaranteed to find something you like. So, unless you’re feeding a small group or have almost no issues with picky-eating, I highly suggest that you take the extra time to look up recipes that you know everyone will like (even better, modify your own!).

While the internet is full of amazing once-a-month cooking recipes, including ones for the oven and crockpot, you do not need them. You can use your own, provided you follow a few important rules. First, you never want to freeze your milk products inside the dump bag. Most are added after the meal has been cooking for a while, so use a smaller, separate bag to store things like milk and cheese that are added in later. I’d also discourage you from adding any grains to the freezer bag for the very same reason. Instead, just add them in when you normally would (i.e. after the meat is fully cooked or when the meal has reached the appropriate temperature), or when the recipe tells you to do so.

It’s a LOT of Prep-Work, So Plan Accordingly

If you’ve considered once-a-month cooking – as in, truly considered it – you likely have a pretty realistic view of what the prep-work will be like. Yet nothing can quite prepare you for 30 meals, all at once, on your counters and cutting boards. It’s overwhelming. But there are ways to make it more manageable. Fist, consider where you can afford to take shortcuts. For example, if you have the money in your budget to buy pre-cut veggies, rather than whole ones, do it. It’ll save you HOURS of prep-work. Literally. The same goes for pre-cut or deboned meats. The less work you need to do, the more likely it is that you’ll find value in once-a-month cooking. The more value you find in it, the more likely you are to stick with it.

Use the Sale Prices if You’re Trying to Budget

Once-a-month cooking can get out of hand, budget-wise, just like any other meal plan. In fact, I’m almost certain that price would have been a deal-breaker for me, had I not planned our meals carefully. I always use the loss leaders at grocery stores to plan the base of my meals. For example, if ground turkey is on sale, I’ll use that instead of ground beef for any recipes that week (or, in this case, month).

The month that I did our once-a-month cooking, our local grocery store had a buy-one-get-one sale on select pork cuts, so we planned most of our meals using that. Beef roasts were on sale as well, so we also planned for some shredded beef sandwiches, pepper steak, and pot roast. Chicken made a pretty regular appearance in our meals, too, since the store had free-range at the same price as factory farmed.

Don’t Forget to Include the Kids

It’s easy to prep and cook meals without including the kids – especially when you’re already overwhelmed by the sheer magnitude of all the prep-work involved. But kids tend to eat better when they’re involved in the cooking process, and it helps them learn valuable skills they’ll need later in life. After all, everyone should know how to feed themselves without having to resort to canned, boxed, or pre-packaged food.

Find a Process That Works for You

Perhaps one of the biggest things I noticed about once-a-month cooking forums and such is that many families seem to feel as though they’re stuck inside a box, like they are required to do things one way or another. This is not the case. Find what works for you – whether that’s using your own recipes instead of the ones offered online or setting up a local group that works together to create their once-a-month meals with less stress and more fun.