It took three years of infertility for Danielle and Adam Busby to finally conceive their now three-year-old daughter. So, when the couple decided to try and expand their family, they hoped they would get more than one child. 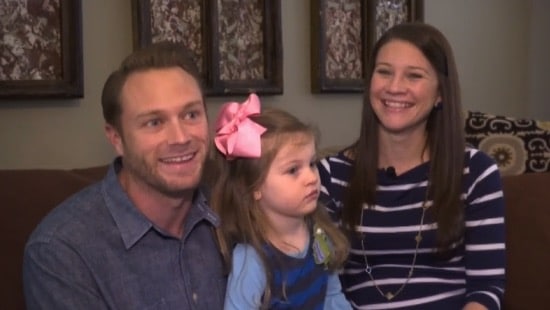 Well, they got their twins, along with three other babies.

“He about passed out,” Danielle said of them hearing the news that the couple would be delivering quints. “I started laughing and was like, ‘Is this really happening?’”

The couple is expecting two identical twin girls and three other non-identical babies. But they weren’t exactly met with a lot of optimism from the physicians at first because, as most folks know, carrying and delivering multiples can result in a number of adverse and even life-threatening complications.

“At first, they didn’t want us to have all five. They wanted us to reduce,” Danielle said. “[But] our hearts just couldn’t do that.”

And so, even with an understanding of what they could face, the couple is moving forward with the pregnancy. They’re doing the best they can to prepare for the babies, with Blayke (their 3-year-old) testing out her upcoming role as big sister and family and friends donating car seats and infant clothes to help out.

Of course, there are other preparations and provisions happening, those that have to do with trying to keep the babies in until at least 28 weeks. And holding onto their faith in the God they say has helped them make it this far and will continue to care for them.

The only other thing left to do is to wait and see what happens—something both Danielle and Adam are definitely excited about.