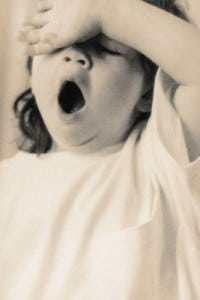 Over the last several years, we have become an on-the-go world. Little down time exists in most families and sleep is a rare commodity – even for children. As adults, we know how a lack of sleep affects our concentration, mood and cognitive abilities but how does lack of sleep affect children?

According to a study conducted by the Autonomous University of Barcelona and Ramon Llull University, a lack of sleep in children can affect more than parents might realize.

Researchers took a look at the sleeping habits, hours of sleep and academic performance of 142 children between the ages of 6 and 7. Out of the 142 children, 65 were girls and 77 were boys. None of the children had any sleep-related pathological changes.

During the study, parents of the children were asked to complete a questionnaire that addressed the child’s sleeping habits and the number of hours they slept each night. According to the researchers, the average child in this age group should receive 9 to 11 hours of sleep. Less than half of the group studied actually met this recommendation.

“Although the sample of children sleep almost 8 hours, their sleeping habit shows us that 69% return home after 9pm at least three evenings a week or they go to bed after 11pm at least four nights a week. As such, pupils that sleep 8 or 9 hours have a worse performance than those that sleep 9 or 11 hours,” the researchers stated.

Generic skills like communicative, transversal and methodological were most affected by a lack of sleep. These skills are important for academic performance. Specific skills like cognitive aspects, motivation, learning and memory were also affected by irregular sleep patterns, but to a lesser degree.

Ramon Cladelles, researcher at the Faculty of Psychology at the UAB stated, “To this end, the lacking hours of sleep distorts children’s performance in linguistic knowledge, grammar and spelling rules and key aspects in the organization and comprehension of texts, to name a few examples. They are basic skills, meaning that if the pupil, due to a lack of sleep, develops problems in this area, it could have a repercussion on all subjects.”

So what is the take home message for parents? “Taking into account the results obtained, we believe that more than 9 hours sleep and a nightly routine favors academic performance,” Cladellas stated. Getting your child to go to bed the same time every night – even if it is the weekend can help. The researchers also recommended that parents attend a prevention program to help them learn more about the importance of healthy sleep habits for children.