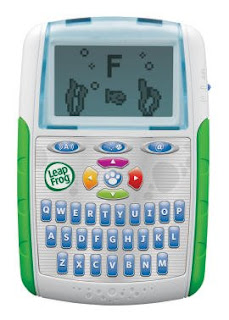 Leapfrog has announced they will be launching a product called the Text & Learn or–as many in the blogsphere are calling it –the “baby BlackBerry.”

Now your kids can mimic you and send text messages and check their schedules at all hours of the day. The device, which is a bit bigger than your average BlackBerry, is geared toward preschoolers who are just learning to spell and includes games that focus on spelling and basic computer skills.

The Text & Learn was unveiled at the U.K. Toy Fair this week and isn’t supposed to be announced in the U.S. until next week, but it will not be available at retail until this summer for $25.

I will be first in line for this cute little gadget. Hopefully it will help my son forget about my blackberry!