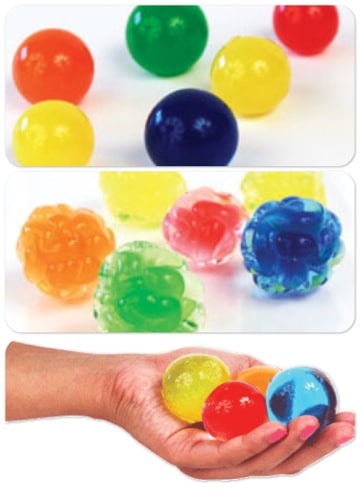 Parents have been warned of the dangers that button batteries, magnetic balls, legos and detergent pods present to little children. Now a new, highly dangerous item has made the list after an 8-month-old baby girl, Aunraya, from Texas swallowed the item: a superabsorbent polymer ball.

The toy, intended for older children, was swallowed by the little girl. Her great grandmother and legal guardian, Frieda Deweese, though she had simply eaten a “piece of candy.” It wasn’t long before great-grandma discovered just how wrong she had been.

Just hours later, Aunraya was vomiting bile. She was also painfully constipated and her stomach was distended. Frieda rushed her great-granddaughter to the emergency room, x-rays were taken and doctors found many larger-than-normal loops in Aunraya’s intestinal tract.

The absorbent ball, marketed as “Water Balz, start out no bigger than a marble. Once they come into contact with water, they extend to 400 times their original size. Once Aunraya swallowed the ball, it started to expand from the moisture in her body. By the time it had reached her digestive tract, it had expanded so much that it had become lodged in her digestive tract, preventing anything from getting through.

Even though doctors couldn’t actually see the ball in her x-rays, they knew something had to be blocking her intestines. They immediately performed surgery and removed the intact gel ball, which had already expanded to 3.5 centimeters; their quick-response intervention very likely saved the little girl’s life. According to the doctors who treated the little girl, the ball could have poked a hold in her gut and caused serious, life-threatening complications.

“There is a tendency to wait and wait,” said Dr. Oluyinka Olutoye, a pediatric surgeon at Texas Children’s Hospital and associate professor of pediatrics at Baylor College of Medicine in Houston. “We were fortunate enough that we did [surgery] early enough. If the treatment is delayed, there could be perforation with peritonitis.”

This is the first ever reported case regarding a blockage caused by one of these balls. Authors of Aunraya’s case report published a statement in the journal Pediatrics after taking the time to further examine five different polymer balls. They wanted parents to know exactly what they’re up against, should their child happen to swallow one of these little gel balls.

“We are trying to sound the alarm as the prevalence of the balls is increasing,” Olutoye said. “While they are fun and make good science projects, [they] can have disastrous consequence when ingested.”

To start, the authors measured the balls before submerging them in water. They then measured them at different time intervals up to four days after submerging them. All of the balls doubled in size within just two hours. By 12 hours, the time frame in which Aunraya had reached the emergency room, the balls had doubled once again to about 4cm in size. After four days, the balls showed no signs of degredation and had grown to as big as 5.5cm in diameter. 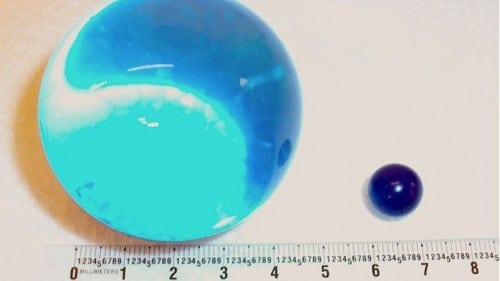 The authors admitted that the toys can be very educational and fun for older children who know better than to put toys in their mouths. But younger children are at serious risk when these toys are around the house. For this reason, they really should be kept out of the house, or at least well out of reach of little hands. This is no different than many other toys designed for older children, and Grant Cleveland, CEO of Dunecraft, Inc., the company that makes Water Balz, reinforces this in his official statement.

“[These toys are] obviously not for an 8-month-old,” Cleveland said. “You wouldn’t let your 8-month-old near [loose] change or marbles. Even legos are dangerous to an 8-month-old.”

Cleveland then added that the toys’ packaging specifically states, “For ages 4 and up. Warning: choking hazard.”

“The marked age is 4 and up, so they’re not supposed to be around toddlers,” he said. “We’ve sold all types of balls, probably for like eight years. We’ve never had a problem, shipping millions of units.”

These toys expand to a dangerous size very quickly. To make matters worse, they cannot be seen during an x-ray. This could present a problem for doctors. Aunraya was lucky – her grandmother actually saw her swallow something, she received prompt surgical intervention. Imagine what might have happened had Aunraya swallowed it when no one was watching!