Home » Mom Parties While Her Three-Year-Old Wanders the Street 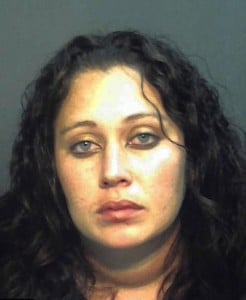 Caleb Rosario could hardly believe his eyes when he and his sister spotted a little boy wandering alone a busy street in Orlando. Even the 911 dispatcher seemed to have a hard time believing it.

“Hi. We found a baby running in the middle of the street,” Caleb told the dispatcher.

“Like a baby, baby. Yeah. He was just running barefoot in the middle of the street,” Caleb responded.

Deputies arrived on the scene and eventually found a nearby home with the front door wide open and no one home. Officers headed inside to investigate and soon found what they needed to identify the owner of the home and mother of the small child: Nicole Finnell.

During their investigation, deputies said that Finnell showed up with a car full of friends, but she told her friends to keep driving. Police stopped the car, however, and learned that she had left the little boy to go partying at a local club, The Cowboys Bar, and at a friend’s house.

Nicole indicated that she had hired someone to watch over her son, but Nicole’s father, Scott Finnell, who is now caring for the little boy, says otherwise. He lives with Nicole and said that he had been out that night. He also said that he’d never  heard of anyone watching his grandson.

“Apparently, she waited until he went to sleep and then left him here and locked the door, and he can unlock the door,” Scott said. He stated that this type of behavior isn’t typical for his daughter, but he can’t help but think of what might have happened if the little boy had made it much further down the road. “If he’d have got on Hoffner, I’d have been getting a call I had a dead grandson.”

Nicole is now facing child neglect charges and is sitting at the Orange County Jail on a $1,000 dollar bond, and it doesn’t look like she’s going to be getting out any time soon. Scott says, if she gets out, it won’t be on his dime.