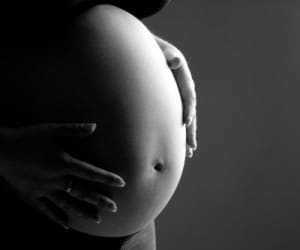 For decades, women have been warned to abstain from alcohol during pregnancy.  The consequences of excessive drinking, during pregnancy, are well documented and a threshold for safe consumption has never been determined.  Yet, despite the warnings and reams of documentation published to sway pregnant women away from alcohol consumption, the March of Dimes estimates that 40,000 babies are born with Fetal Alcohol Syndrome or other spectrum illnesses, each year.

People affected by FAS are likely to exhibit more aggressive behaviours, are more prone to infection, disrupted sleep patterns and, as adults, are more likely to struggle with substance abuse.

A recent and controversial British study, published in the journal Epidemiology and Community Health, reported that moderate drinking during pregnancy, (one or two alcoholic drinks per week) had no discernable effects.  But, because of the devastating consequences of overconsumption, listed above, women are still urged to abstain from alcohol once they are aware of their pregnancy.

FAS is caused when alcohol, consumed by the mother, crosses the placenta and affects the oxygen levels and nutrients reaching the developing child’s brain.  This restriction of oxygen and nutrients causes varying degrees of neurological and developmental damage.  The end result is a range of attention and memory deficits that the individual will struggle with for life.

New research, set to be published in the January 2011 issue of Alcoholism:  Clinical and Experimental Research, looked at the cognitive processes of a group of children, all around 11-years-old.  Of the 217 children studied, 38 were born to mothers who reported participating in binge-drinking during pregnancy, the other children were used as control subjects as their mothers either abstained or drank very little during pregnancy.

The researchers, from Wayne State University School of Medicine in Detroit and Laval University in Quebec City, were able to study the brainwaves of the children as they ran a series of tests.  They discovered that children affected by FAS were less able to comprehend the meaning of a stimulus.  They also paid less attention to specific tasks and had less effective recollection processes.

“The advantage of this technique is it lets you break down the different stages of the memory process,” said researcher and developmental psychologist, Joseph Jacobson.

Dr. Jacobson and his colleagues discovered that the FAS affected children had difficulty with the initial processing of information and also “in the later stage, when they’re trying to retrieve information.”

Clancy Blair, a professor of applied psychology at NYU, said, “the interesting thing here is that although the kids are not differentiated by the performance on the tasks, the brains of FAS kids have to ‘work harder’ so to speak.  That is, process the information for longer periods of time and less efficiently than do typically developing kids, to arrive at the correct response.”

Having broken down the points in the cognitive process that are difficult for FAS affected individuals will help clinicians devise exercises to help children compensate for their difficulties and improve their comprehension and recall functions.  – Jen R, Staff Writer