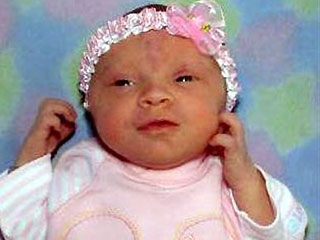 A woman came to 21-year-old Stephanie Ochsenbine’s home in the small town of Lonedell on Friday, attacked her with a knife and left with her week-old infant, Abigale Lynn Woods, officials said.

The family has posted fliers in gas stations and restaurants in neighboring Union. The baby, called “Abby” by her family was born on Sept.8, has dark brown hair, dark eyes, a strawberry birthmark on her forehead and weighs only 6lbs.

Callers continued to offer tips, but none led to a suspect.

“Any lead is good, but so far there’s nothing that has stood out. There’s a lot of information we have, but nothing concrete.” Franklin County Sheriff Gary Toelke

The attacker had gained entry to the family’s home Friday afternoon by asking to use Ochsenbine’s telephone. Ochsenbine’s boyfriend, James Woods, who is Abby’s father, was at work at the time, police said.

They fought after the woman told Ochsenbine “I’m here to take your child,” and Ochsenbine was stabbed several times and her throat was slashed.

Ochsenbine’s 1-year-old son, Connor, also was in the house but was unharmed.

Ochsenbine passed out and police aren’t sure how long she was unconscious.

When she regained consciousness, she picked up Connor and went for help, trying two houses where no one was home before arriving at neighbor Pat Bearden’s home.

“She was standing there with blood all over her and said ‘Somebody stole my baby,'” said Pat Bearden, 69.

The abductor has been profiled as someone who possibly had a child die recently or as someone who could not have children, told people she was pregnant and needed to steal a child so her lie would not be found out.

From 1983 to 2002, there were 217 reported cases of nonfamily infant abductions nationwide, and all but a few babies were recovered safely within 25 miles of where they had been taken, according to a 2003 study by the National Center for Missing and Exploited Children. About three-quarters of the kidnapped infants were recovered in less than five days.

I posted this article because I cannot fathom how this new mom is feeling. After spending nine months preparing for the baby, going through labour and then only having her home for a few days, it must have been devastating for her to have the baby snatched by some women. A sad and deranged woman who may have has a loss recently and is now compensating for it.

It is terrible to know that even in a small town you cannot open your doors to a stranger. Our friends and family always laugh at me because I keep my doors locked at all times and rarely answer the door if I’m not expecting anyone. I guess it’s not so crazy afterall.