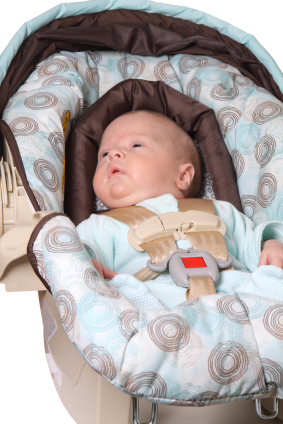 For many parents the infant car seat is a saving grace. It is a convenient way to tote their baby around while running errands, visiting friends or out shopping.  Researchers from Cincinnati Children’s Hospital Medical Center are now urging parents to leave the infant seat in the car to keep their baby safe.   Their study, which was published today in the Journal Pediatrics has found that almost 9,000 infants go to the emergency room every year for car seat-related injuries that happen outside the car.

Lindsay Wilson and Dr. Shital Parikh, both from the orthopedics division at the Children’s Hospital, reviewed five years worth of data from a national U.S. surveillance system to find records of babies less than one year old that were taken to the ER for car seat injuries.

They found from 2003-2007 about 43,500 babies in the entire U.S. were brought to the ER for a car seat injury. Most of those injuries happened when babies were not strapped into their carriers and fell out of the seat when it fell off a table, counter or out of a shopping cart.

Of those injuries, head or neck injuries were most common, especially in the youngest babies, who were also more likely to go to the ER.

Part of the reason these injuries are so common is that parents may assume that babies won’t be moving around because they haven’t developed good coordination yet. So they commonly leave the baby in a car seat without strapping it in, or set the seat somewhere that puts the child at eye level. 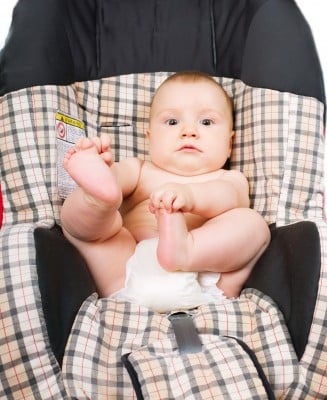 Dr. Gary Smith, director of the Center for Injury Research and Policy at Nationwide Children’s Hospital in Columbus, Ohio, who was not involved in the study, told Reuters Health,

“Often parents don’t use the safety harnesses or safety strap in the seat or in the carriage and so the kids … wiggle and they slide right out. Child safety seats were intended for use in motor vehicles to prevent injury in the event of a crash. That’s their purpose and that’s what they should be used for.”

According to the Centers for Disease Control and Prevention, babies less than a year old go to the ER at a higher rate than any other age group. In 2006, there were 84.5 ER visits for every 100 infants – or about 3.5 million total visits. The most common cause of injury in babies is some sort of fall.